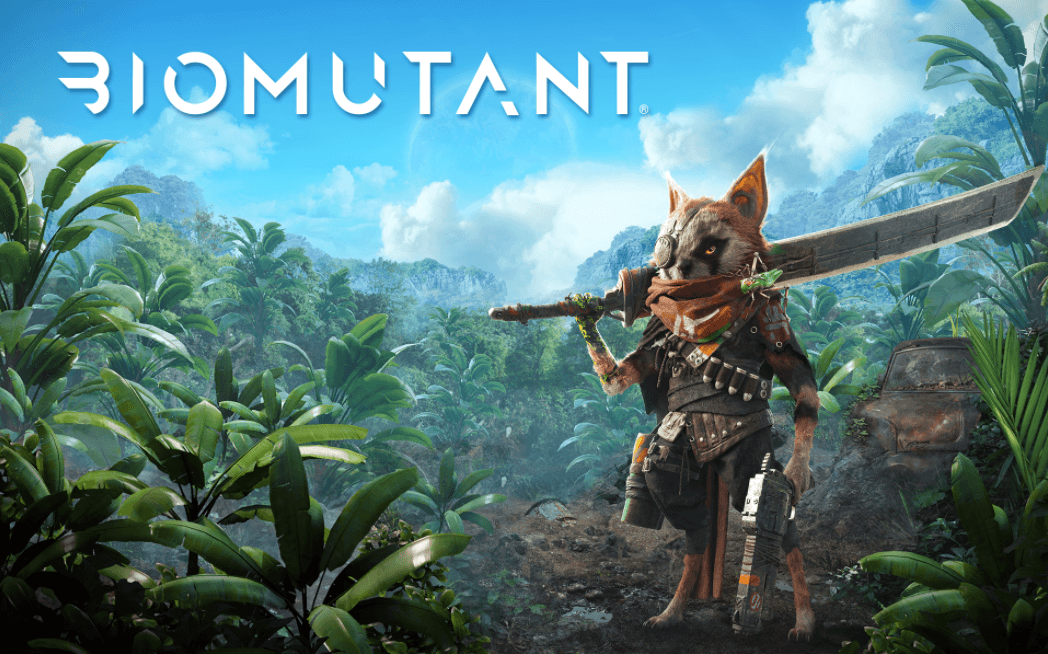 Action-RPG fans have been eagerly anticipating the green lands of Biomutant since its announcement at Gamescom 2017.  Now, the title from Experiment 101 Studios and publisher THQ Nordic is coming to our shores in the spring of 2021. Does Biomutant live up to the hopes and expectations placed on it?

Biomutant calls itself a post-apocalyptic Kung-Fu fable and this succession of terms determine the direction taken by the Experiment 101 project. This dark and colorful tale describes the inevitable end of the world, the death of the Tree of Life, against the background of a prophecy announcing the emergence of a legendary warrior. This one-eyed Ronin is about to decide the fate of the world. This is the starting point of this adventure which leaves the hero, embodied by the player, free to make his own choices and take responsibility for the consequences and impacts of his decisions. During this journey, which takes 15 to 20 hours to complete in a “straight line”, the path is much more important than the destination.

The authors rely on a simple concept, but one that has proven itself in the past, the freedom to take our destiny into our own hands. This translates into an aura of darkness and light in the game. This playful transposition of the philosophical concept of “Yin and Yang” is tarnished and/or illuminated throughout an epic that regularly wishes to place the avatar in front of moral dilemmas. Manichean taken separately, the choices made by the players ultimately decide the fate of the hero and therefore the world. However, the wind of freedom that blows on Biomutant is not constant. The vision of the developers comes up against the need to progress in a story that is certainly non-linear, but sometimes too directional and, above all, marked out by numerous quest markers.

The epic created by Experiment 101 is based on several narrative arcs that evolve in parallel, that intersect and even collide in order to guide the one-eyed Ronin towards a particular destiny. The outcome of the war between the Tribes who are constantly fighting each other, between submission by force and search for harmony, the elimination or not of the Mangemondes (who are constantly nibbling at the roots of the Tree of Life) as well as the hero’s balance between the need for forgiveness and the desire for revenge, set the destination.

The multiple endings of the game are also linked to the dark and light aura of the hero, and thus to the actions taken by him, even the smallest ones during the adventure. The different main quests and other side stories, often repetitive, are then integrated into the story. Between unification and submission by force, handing out and killing, empathy and bloodlust, the future is certainly outlined, even if the objectives remain the same.

The story stands out mainly because of its light tone and its humor, which is often playful, and denotes the themes addressed. Biomutant is childish in its writing with a vocabulary understandable by the youngest, but skillfully underlines the horrors of war or the consequences of ecological disasters to come. The game proposes a double reading of the events told by an omnipresent narrator who tries to lighten the whole, even if it means doing too much. However, it is possible and highly recommended to reduce the frequency of the voice-over interventions in order to fully enjoy the world around you without being disturbed every two minutes by a commentary.

Biomutant suffers from a rushed narration, like its almost sloppy introduction, which does not reflect the adventure to come, but shows a minimalist setting, to say the least. The (too) static cinematics struggle to transpose the urgency and importance of the situations on the screen. The same goes for the flashbacks. These playable sequences that retrace the hero’s childhood are cruelly lacking in rhythm, and struggle to involve us emotionally, unlike the acts committed by this same hero in the present.

Indeed, the adventure here takes a malicious pleasure in confronting you with your contradictions, your actions, and your relative goodness. And if you want to discover the different destinies of the one-eyed ronin, the “New Game+” option allows you to start the story again while keeping your experience, your weapons, and equipment as well as your aura.

THE LANDS OF THE APOCALYPSE

The artists of Experiment 101 Studios have built a fantasy world in an open world conducive to exploration. This invitation to travel ensures a change of scenery at every moment, mainly outdoors with its different biomes, seven in all, between forests, jungles, mountains, deserts, dead zones, etc.

In this apocalyptic world, an abundant nature born from contamination and pollution takes back its rights on the ruins of an ancient civilization whose origins we won’t mention here, even if they are identifiable at first sight. The fusion of flora and urban elements of all kinds gives birth to unique and varied environments where wandering is pleasant, even if the wildlife shines by its weak presence.

The surroundings could seem empty, even lifeless… because of the apocalypse, but in fact, many characters, places, and mysteries decorate the visit. Exploration in its purest form is often rewarded by a discovery, however small, a conversation, but above all by the loot that is essential to survive down here.

An encounter with an NPC, seemingly ordinary, could even have repercussions on the rest of the events, if not the end of the adventure. In addition, the developers have made it easier for the hero to move around the world with a fast travel system and the availability of several unlikely means of transportation such as a mechanical hand and various mounts to tame.

Biomutant, despite its good intentions, struggles to rise to the level of the competition technically speaking. The realization is dated, mainly in the indoor environments, even if the art direction compensates for the lack of technique with clever touches of colors and lights once in the open air. In the end, the title suffers from a short display distance, sometimes coarse textures, unexpected objects appearing (clipping), and slowdowns on eighth-generation consoles.

Surviving in the unforgiving world of Biomutant requires learning an ancient martial art that skillfully blends ranged weapons and hand-to-hand combat. The one-eyed Ronin has mastered the art of Wung-Fu since his youth and knows how to defend himself when the situation requires it. The combat system relies mainly on the weapons equipped by the hero at a given moment. These determine the available combos, the special moves, and therefore the way to reach the Super Wung-Fu, in other words, a series of ultimate attacks to get rid of the troublemakers.

It’s all about dodging, highlighted by Slow Motion to make the sequences epic, ranged attacks to reduce enemies’ health, and melee combos to finish them off. The warrior can also rely on various psychic powers and mutations acquired during the adventure that allow him to overcome the toughest opponents. This Action-RPG is not an ordeal in itself.

Biomutant remains a game accessible to all, although the fights require some time to adapt. Unfortunately, it lacks some punches. The impacts, mainly in hand-to-hand combat, struggle to convey the violence of the blows.

The varied bestiary, between anthropomorphic characters and simple creatures… fruits of evolution, manages however to keep the interest of these confrontations intact by alternating the forces in presence. The boss battles, four in total, only enrich the experience on the surface.

The face-to-face battles with the Mangemons are certainly memorable but remain conventional in their conception and execution. There is a certain mastery of the confrontations in general, a mastery that would have deserved to gain in intensity and finish to satisfy lovers of martial arts and war games.

FROM BRICKS AND MORTAR

Biomutant starts without too many surprises with the creation of the main character, and let’s face it, Experiment 101 offers customization fans a complete editor. It displays six races, five classes that determine several passive abilities, coat options, DNA mutations, and even a degree of resistance to certain types of contamination.

These attributes are generally difficult or impossible to change once the adventure has started. You can of course create a new avatar, but that means starting a whole new journey from scratch. There are some exceptions, if you meet the right people while wandering the map.

Of course, the increase in power of the avatar is achieved by gaining experience, which translates into a successive increase in various statistics, but not only that, mutations and other psychic powers, some of which depend on your aura, are added to the many options for deciding the future of the one-eyed warrior.

Without being essential to survive, these supernatural abilities spice up the confrontations, and add a certain degree of playful and visual surprises that we don’t mind. The destiny of the Ronin of the legend is decided by the weapons, the choices made, as well as his physical evolution throughout the adventure.

To defend himself, the one-eyed warrior also uses his talents to make all kinds of equipment imagined with what he finds along the way. The crafting system and its millions of combinations is remarkable for the variety of different components to assemble in order to obtain ever more powerful weapons or armor.

Moreover, the amazing design obtained by modifying the items over and over again makes Biomutant’s crafting unique in its kind. Exploring the world is justified by the simple pleasure of imagining the next gun, the next sword, and then creating them. The same goes for the hero’s outfit, which, after many modifications, has a style that belongs only to him, and which will be difficult to recreate because of the numerous possibilities and the omnipresent randomness when looting.

Biomutant is what we expected from it, nothing more and nothing less, namely a generous project, full of good intentions, and which, with its own atypical vision of the Action-RPG, breathes a breath of fresh air into the genre. The title from Experiment 101 Studios is an invitation to explore a colorful post-apocalyptic universe, to karmic destiny, to avatar customization, and to martial arts. It struggles, to be honest, to bring these different aspects to life and to merge them. The fact remains that this experience, equal to no other, is different, surprising, and disorienting to the point of being memorable. However, it is necessary to get over a technical production that is a bit late and a progression that is sometimes too direct.

30 Celebrities Who Gave Up Fame To Live Normal Lives