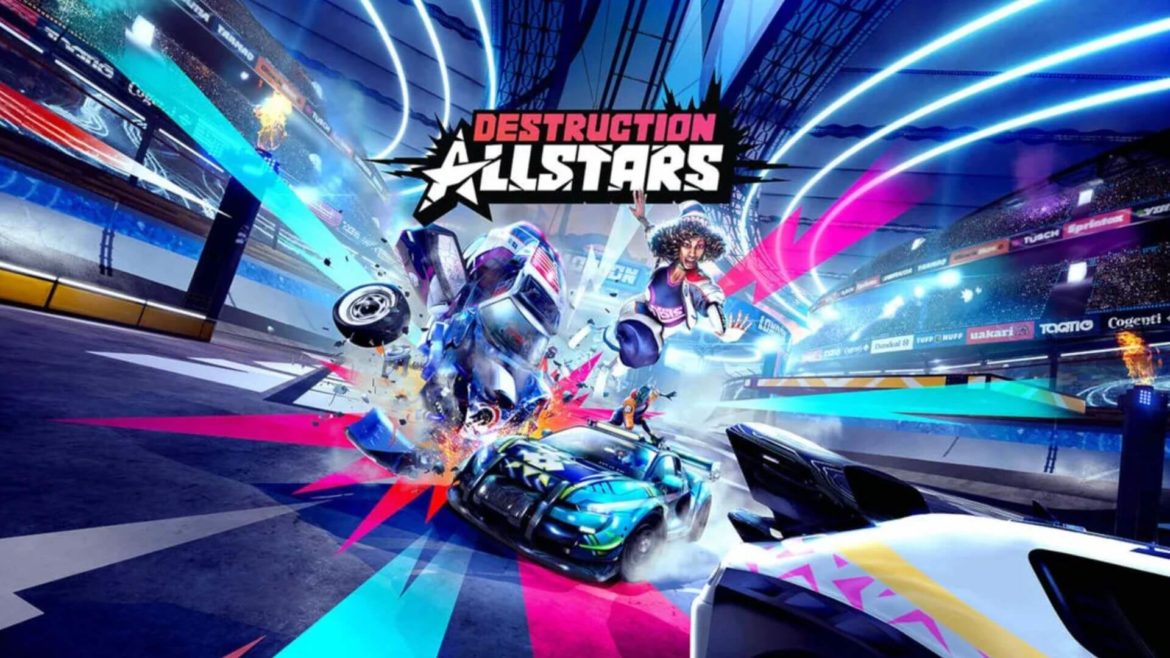 At the end of the 90s with Vigilante 8 and Destruction Derby in mind and at the beginning of the 20s, we think in particular of Twisted Metal: Black, Cel Damage or even the little known 187 Ride or Die, productions putting the player in an arena behind the wheel of a motorized machine ready to the battle were legion in the videogame industry.

It must be said that this type of game, often accompanied by a playable mode for up to four players, promised wild games between friends on the same couch. This once a popular recipe and unfortunately it felled into oblivion with the arrival of the so-called “HD” consoles with the Xbox 360 in 2006 and the PlayStation 3 in 2007. Despite a considerable loss of speed, a few titles tried their hand at it during this period, but to no avail, leaving a gaping hole to be filled. That’s where Destruction AllStars, the latest release from Sony Interactive Entertainment, comes in.

The crux of Destruction AllStars is a simple one: drive fast and hit hard. This is often extremely satisfying to do as well, because it makes it easy to push down on the accelerator, line up your target, and then flick the right stick forward to slam into an opposing vehicle. The harder you hit the other car, the more points you’ll get: one point for a light hit, two for a medium one, etc. Keeping things for the most part nice and simple when there is so much going on elsewhere on the screen, not least the collisions constantly taking place around the gorgeous looking arenas.

AN AMAZING FORMULA THAT QUICKLY FINDS ITS LIMITS

Here, all hits are allowed! The player can of course activate the boost of his machine to push his neighbor in the scenery, or even get out of his vehicle to steal or set a trap for the enemy. Yes, unlike its spiritual ancestors, Lucid Games’ game doesn’t just have motorized phases, but also features walking sequences where the player can move as he wishes as he goes through the different levels: he can jump, hit, dodge, and even run on the walls. This new feature in the world of motorized combat games is not to be taken lightly, since it takes up as much space as the game that puts you behind the wheel of a racing car.

The racing game will constantly push you to eject from your car to avoid ending up in a mess, to steal other vehicles placed here and there, or to collect crystals. These crystals are essential if you want to obtain your hero’s Breakers, and unique abilities that will allow you to take on the other side. Giving so much importance to the phases on foot is unexpected, and has surprised us, it works very well, especially in the Stockpile mode, the most relevant mode of the game, where you even have to get out of your vehicle to score points.

The title knows how to plunge its budding pilots into this motorized chaos where the cars don’t hesitate to pitch after receiving a brutal shock on their flank – a welcome aspect that you wouldn’t imagine landing in such an arcade-style steering game – but unfortunately, it can’t keep them awake, due to often confusing actions and game modes that don’t challenge its players. Only Stockpile is able to bring a certain amount of energy between participants (a game mode that reminds of the Zone Capture mode found in many FPSs such as Call of Duty: Black Ops Cold War or Battlefield 1).

The other three modes, on the other hand, will give the ugly impression of letting the drivers go about their business. In fact, there is nothing to remind them that they are indeed in a competitive game. The actions of teammates or enemies are never highlighted, so the player will simply race against his opponents to score points until the experience becomes boring, and given the lack of content in the software (which we will come back to later), this feeling comes quickly.

To make up for this unpleasant feeling, the title could have offered slow motion and background music to punctuate the confrontations or even “killcams” to unite this fractured community a little Destruction AllStars is satisfied with the minimum union and only offers experience points as a reward, as well as AllStar coins to spend in the game store (coins used to unlock skins and other emotes). The strange thing is that the various elements we pointed out are ultimately swept away by the Solo mode of the production.

A SOLO NOT SO UNINTERESING AS THAT

In Destruction AllStars, it is, therefore, possible to play against bots in the four available game modes, and strangely enough, here, everything works more or less well. The duels gain in impact thanks to the addition of various tricks reminiscent of the Burnout saga, for example, but also in interest thanks to the Challenge Series. In the end, this is the game mode that we preferred to venture into since it offers a variety of objectives: time trials that must be completed as quickly as possible while achieving certain additional objectives, more classic but better-staged confrontations, and cinematics that slightly reveal the backgrounds of the various heroes. But of course, there’s a little hitch! A small snag that could make many people scream.

Although the first chapter dedicated to Ultimo Barricado is free of charge, the second chapter is not. And, oh! Surprise! The currency required is the one you get only when you take out your credit card. The short stories are certainly offered at a derisory price (about 1.99$ per character), but for a game normally sold at the gold price, this is unacceptable. We tried to obtain this currency by passing Online levels or by achieving all of Ultimo Barricado’s side objectives, but to no avail, the PS Store box remains mandatory for the moment. Why for the moment? Because daily challenges will be introduced later in the year, and these, when completed, will reward players for this rare currency. But while waiting for this famous feature, it’s a whole part of the content that’s being cut. Content that deserves more attention.

16 characters, 16 unique vehicles, 28 “classic” vehicles divided into three categories, 4 multiplayer game modes, and even a Solo mode, said like that, it makes you dream. But behind these pretty numbers hides a terrible truth: Destruction AllStars clearly lacks content. The different game modes offer little fantasy and constantly ask players to race each other to score points. But that’s not the worst part… The most serious thing is the layout and visuals of the different arenas. Contrary to Rocket League, one of the great inspirations of Lucid Games’ production, here, whether you travel to London, Tokyo, or Las Vegas, you always feel like you’re in the same environment.

This is all the more damaging since the production has taken care of its appearance. Despite an artistic direction that was greatly inspired by Epic Games’ Battle Royale, Lucid Games’ game remains a particularly enjoyable title to enjoy. Running in dynamic 4K and 60 fps, the constantly fluid game features chipped levels, vehicles modeled in the finest details, consistent body deformations, and carefully animated characters. Best of all, the game even makes effective use of the DualSense’s various features. You can feel the movements of our heroes, as well as the gas pedal and brake pedals.

We didn’t want to get there, but finally, we’re going to do it! Destruction AllStars is the Bleeding Edge of the PlayStation 5. The title, although generous in its proposal, notably revealing two successful game phases (the one behind the wheel and the one on foot), fails because of too much classicism. The different game modes are lazy, to say the least, and insist on offering the same formula over and over again. A formula where you just have to race against your opponents to score points. The whole thing could have been more dynamic and could have appealed a little more to the players by offering various tricks such as slow-motion or “killcam”, but unfortunately, Lucid Games preferred to keep this type of feature for the Solo mode of the game. A Solo mode that could also have been successful, at least if it wasn’t restricted by a system that forces the player to take out his credit card.

Prince of Persia: The Sands of Time Remake is postponed again