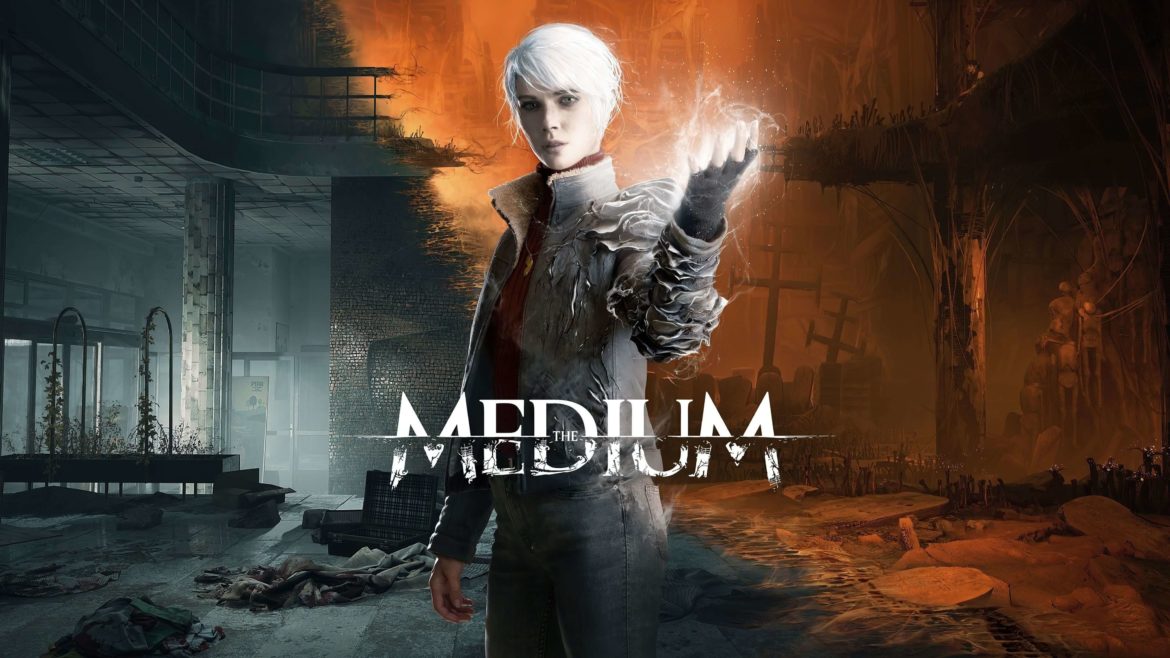 Since the launch of the new generation devices, specifically the Xbox Series X last November, we didn’t have a new powerful game that isn’t just a remastered of a previous one, that could arguably use the capabilities and specifications of the new generation, but here the waiting period is finally over, and here we get the first of these titles through the psychological horror game the Medium by the Polish Developer Bloober Team, who introduced us to another horror game in 2019 which is Blair Witch.

But this time with promises by the studio to avoid the naive mistakes they made during their previous project. Will Bloober Studio be able to exploit the capabilities of the new generation of Xbox devices and their experience in this field in order to deliver the best horror game for them? Of course, we will get to know the answer to this question at the end of our review of this title.

A tour between the realm of spirits and our real world

The Medium is a psychological horror game primarily about the character “Marianne” who has the ability to connect with the “dead” spirit world. and talk to souls, and can live and navigate in this world and our real world at the same time. Suddenly Marianne gets a phone call telling her to go to one of the abandoned sites next to a park located in the countryside of Poland, and there Marianne will have to try to survive herself and find out what is going on around her especially, and know the pain that this place has witnessed, and get into a confrontation with an evil spirit called “Mao”. Will Marianne be able to survive and escape this frightening nightmare? Of course, only you can answer this question when you experience the game’s events.

The game offers one of the best horror stories, as it is not based on trying to scare the player only by placing monsters or supernatural beings in separate places in the game, rather, it is based on moving between the realm of spirits and connecting them to our real world, whose anger and grief affect both worlds. Here it is the responsibility of “Marianne” to help those stray spirits reach their end and their final shelter and comfort, but just as there are spirits who want to end their suffering, there are others who do not want to leave easily.

The story’s presentation takes us back to the classic horror games that rely mainly on the element of exploration, where you will have to wander around the places and look for messages, phrases, and tools that help you complete the puzzles so that you understand well what is going on around you, and also to learn about the nature of the person and his past experience in order to help him. Better yet, all the details and information that you will get during your exploration tour are quite fruitful, especially as it is highly related to the events of the story and will also help you in solving puzzles.

The game offers the perfect experience for the old classic horror games fans, especially the Silent Hill series, which you can notice its impact on the developers, who have been inspired by the way the story and its terrifying world is presented within the events of that game. Starting from the first hour of your experience, you will feel a lonely desire to continue playing the game to finish it and to know the truth about the world that you are entering with “Marianne” in that unknown region, and also to know the nature of the spirits that will meet.

The gameplay based mainly on exploration and solving mysterious puzzles

Unlike traditional horror games which have become very widespread over the past years and which can be classified as survival horror games, what The Medium offers is very different from that type of games, because this game is primarily a psychological adventure horror game, based on exploring the game world to a great extent. You will have to navigate between places and some of them as mentioned above in order to get messages and blogs that will help you understand what is going on around you and to continue your progress in the game, not only that, but the element of exploration provides you the possibility to study the surrounding environment and get some tools to help you solve puzzles, open closed doors, and learn the secrets related to the spirits that you will encounter in the game.

Exploring two worlds at once also make The Medium a completely different experience from the rest of the horror games, cause you can see lost souls and the world of humans together, and by merging both worlds at the same time through one screen by split-screen, the game will transport you in a very smooth and enjoyable experience, In order to decipher the riddles, as both worlds are connected to each other, and in order to solve and decipher the mysteries, you will have to enter a world in order to open an entrance to the second world and vice versa.

Other than exploring the worlds of the game “souls and humans”, the game is based largely on solving puzzles, which you will find in the first hours of the game very enjoyable, as it forces you to focus on everything around you and explore the whole gameplay environment in order to get the goal or idea that can help you decipher the puzzle. But in the last hours of the game, the matter gradually turned into a nuisance, especially with the repetition of some puzzles and the slow-moving range during the implementation of most of them, we wished the studio continued to diversify the puzzles especially since the game does not require long hours of play, it is a short story game that you can finish it completely within 9 Hours of gameplay, while you can the story only in less than 6 hours.

The camera component of the game was also an ideal choice from the game developers, as recently horror games are introducing a moving camera system in order to present exceptional moments of panic during the game, but here the game returned us to the atmosphere of classic horror games and provides us with a fixed camera system that you will not be able to move to the right or the left, it has to move with you, and it was a better option than the moving camera experience that the studio described at the beginning of its development.

It can be said after our experience of the game’s events that the Bloober team was able to competently use all the capabilities of the Xbox Series X, which, by the way, is the platform that we tried the game on, so the graphic level in which the game appeared is very good, both in terms of the character’s design and its different features between the state of fear and sadness, and even the design of the gameplay environment that appears well, the game works in 4K across the platform and provides us with a graphic experience that forces you to respect its developers, and not only that, but you will also notice the support for Ray Tracing technology that shows the game particularly well in moving and shadows. But in some places, there are some minor technical problems that can be addressed in future updates, especially those lightning colors that appear randomly in the game.

To complete this great artwork presented by the Bloober Team, the studio hired the famous composer and musician “Akira Yamaoka” who gave us one of the best horror game music in Silent Hill, returning to us again to play his heart-wrenching melodies during the game events, which was very appropriate to the atmosphere of the game and was one of the main horror factors in the game, which is what we have expected from “Akira”. In addition to the sound effects that caused me to close the game more than once whenever I started to hint at the presence of someone or mysterious sounds coming around me.

The Medium has been able to return the magnificence to horror games again after it began to fade over the past generation, the game provided us with a high-level story experience, whether Marianne’s views and perspectives and her abilities to link the world of spirits and the world of humans, or even the opinions of the spirits who you will meet, and the tragedies that they have seen. Combining that story experience with enjoyable and smooth gameplay that depends mainly on the exploration of the environments and knowing the secrets surrounding that deserted area in which the game’s events revolve, and with the puzzles included in the game and an indirect confrontation with the evil spirits that are chasing you.  As for the graphics and the soundtrack, the game was great, and it is a promising start for the new generation games that we hope to get more of that quality in the coming period.

PS5: Big Sales In 2020, But Slowed Down By The Shortage Of Consoles