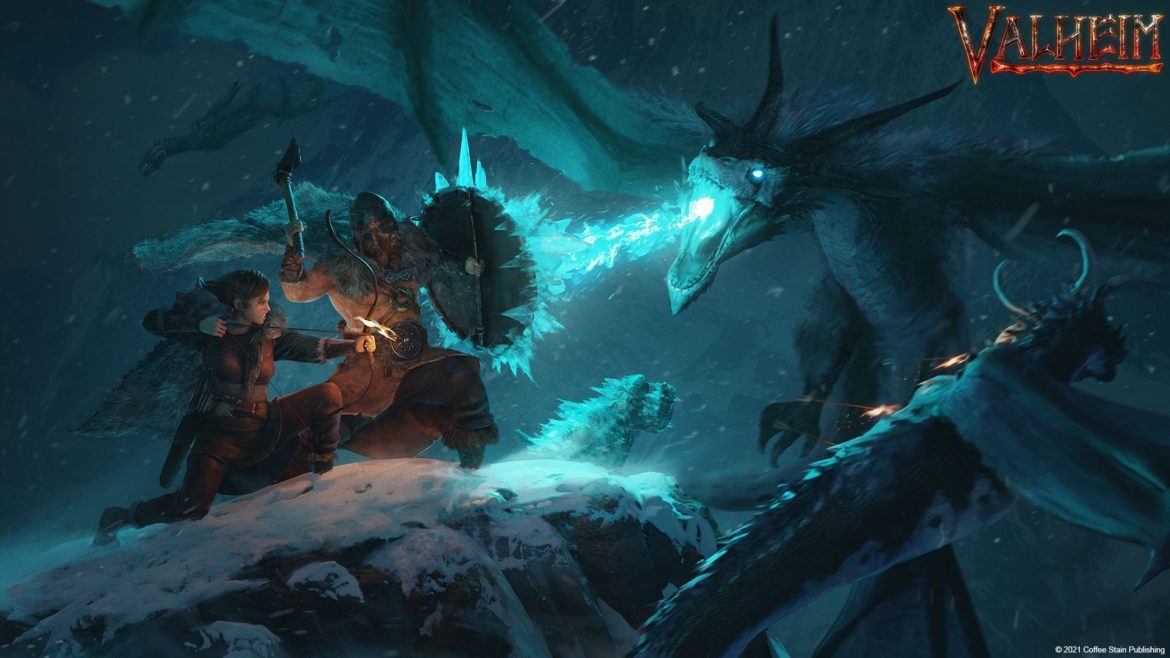 Coming from nowhere at the beginning of February with early access, Valheim quickly won the hearts of gamers, and in a very short space of time, it has become one of Steam’s best-selling games. This survival game developed by Iron Game Studio and published by Coffee Stain Publishing, under the leadership of which Satisfactory and Deep Rock Galactic have already launched, has all the arguments to win over time, or will it be a flash in the pan.

NOTE: About early access tests
This Valheim review evaluates the qualities and flaws of the early access and is not a test of the final product. This test is valid until the official release and will be updated as the game improves before the final version is tested.

WELCOME TO THE VIKING LAND

Set in the heart of Nordic mythology, Valheim is the world in which your Viking, who you can practically customize at the beginning of the game, finds himself parachuted by a huge Valkyrie, with the aim of proving his worth to Odin by overcoming the forces of chaos that populate this verdant wilderness. This is the beginning of a scenario developed to give a little context and depth to the exploitation of the Viking universe in this survival game that will certainly not shine for its narrative qualities.

Certainly, a few runes placed here and there regularly give you a few cryptic sentences to explain a little bit the past of this (huge) world, and the game does have a thread punctuated with boss fights to find and summon, but things don’t really go further, but who cares, after all, Valheim’s interest lies elsewhere and still manages to try to go a little further than the traditional “sandbox” very often proposed in the register.

It is first and foremost the artistic direction that strikes. Quite clear and amazing, Valheim’s visuals oscillate between pixelated and retro designs while offering truly beautiful lighting. Each world created here is generated procedurally, but will logically always propose the same biomes, distributed differently, each of them enjoying its own atmosphere and following one another with great nature, making the exploration in the game very pleasant thanks to the changing atmospheres and the varied and coherent weather effects. Usually very nice, stable and quite low on bugs for an early access survival – the genre has got us used to much worse – Valheim could seduce only by its visuals, but fortunately, it is not an empty shell and shows a real knowledge in the field of open-world survival, but tries to combine a classic approach with a bit of personality.

SOFTENED AND NOT TOTALLY CLASSIC SURVIVAL

Indeed, it is important to know that on certain points, Valheim is not as punitive as many of his colleagues. Thirst, for example, is not managed by the game and hunger is certainly to be taken into consideration, but it determines mainly your standard of living and your maximum endurance rather than your pure performance. In fact, you can eat three different dishes at once.

For example, it is useless to hope to eat two freshly cooked types of meat at the same time, you will have to wait until the effect of the first one fades away to be able to devour a second one. However, you can combine several types of food, each of which has its own statistics and will give you a certain amount of extra health and endurance. It’s up to you then to see which fruits to harvest and which animals to hunt in order to obtain the most efficient statistical combination, which is essential to survive in the hostile world of Valheim and above all to progress there.

You know the tune, you start the game in the middle of the random world you’ve just created (or joined with friends) and have no tools to shape your equipment. So you’ll have to go out in search of wood and stone to carve your first basic axe in order to cut your way through some slightly stronger trees. The way crafting works in Valheim is quite traditional and doesn’t totally reinvent the wheel. As you crafted new tools (with a handful of patterns already known at the beginning of the game), you unlock new ones, allowing you access to more valuable resources, opening the window for new builds, and so on.

In addition to the various equipment (bow, leather equipment, etc.), it is also your first shelter and reappearance point which will be very useful in case of death, as the world of Valheim is terribly vast, but certain requirements are needed before you can really multiply the beds and storage spaces. Indeed, you will always have to build a workbench before you can make yourself a bed, which will have to be located next to a campfire and the whole thing will have to be always covered with a roof. While it is easy to understand the need to have a building that is at least a little covered so that rest can be repaired, this covering constraint sometimes puts a brake on the player’s mobility, but even the constructions are rich and varied, sometimes they lack the precision.

Once you have mastered the basics, however, you will realize the richness that Valheim has to offer. From the small straw cabin, as you progress, you will be able to pass to the Bronze Age and multiply the constructions. Your little raft will be able to trade its place for a boat so that you can set out without fear to conquer the oceans, and you will also be able to quickly regain your fortified base if you take the trouble to build portals if you have already harvested the resource and the appropriate leader.

Valheim is certainly an exploration game, but as mentioned above, there is a common thread that requires you to defeat several bosses. If the first of them is indicated on your map, you will, (after a fuzzy indication of your Valkyrie and an in-game guide) have to explore the lands of the world and invoke the next creature in order to defeat it and also to benefit from certain permanent attributes once your mission is accomplished as well as additional equipment that sometimes unlocks new in-game accesses. A rather clever way to encourage players not to stand still and to vary the pleasures to discover all the secrets of the world.

Of course, exploration, certainly rewarded, is of course dangerous, and a whole bunch of creatures from Nordic mythology are present in Valheim’s universe. Draugrs, Trolls, Dwarves, Skeletons… the enemies in the game are more or less persistent depending on where you meet them, so you’ll always need to make sure you have good equipment (which can be repaired for free on any workbench you’ve built – a little gift for players) before you set out on your adventure or before you enter one of the game’s many dungeons, dungeons which, due to procedural generation, are not particularly exciting to explore, but which prove to be rewarding for progressing in your construction tree.

So to make your way through the dark alleys of these dungeons, you will necessarily have to fight, which is clearly not where Valheim shines most brightly as it stands. Endurance system, single hit, counter, and dodge roll are the mechanics adopted here and the whole thing is not very intuitive, as much because of a camera that is not always accurate as of hitboxes whose dimensions are difficult to define. However, with a bit of caution – and the right equipment – the exploration of Valheim is not overwhelming and offers, for early access, a very varied journey and many prospects for evolution.

After all, it is by forging that one becomes a blacksmith, because rather than opting for a skills tree in which to spread points of experience, Valheim favors simple evolution through practice. Handle the knife, the axe, or discretion, and you progress in level in each of the tools you handle, thus increasing your performance (damage, endurance) when using them, also giving a real feeling of your character’s rise to power. To finish on the combats side, we could argue against the aggressiveness of the monsters, which have a tendency to stick to you for many meters, not always giving you the opportunity to escape.

About death
Death in Valheim, although quite classic for the genre, remains globally less punitive in the face of what the competition had gotten us used to in the past. Certainly, when you bite the dust, all your equipment will be left on the ground and you will have to go back to your body to get it all back. However, if you die during the trip, a new grave with the freshly harvested equipment will be dug at the place of your corpse, but it does not make the previous one disappear. As long as you have previously placed a marker at the place of your first death, you should never be definitively separated from your equipment. If your deaths are not very far apart, the usual penalty applied to your character – a reduction in the skills you have acquired so far – will not apply. Although recurring, death in Valheim is not very punitive.

All in all, it is difficult to say that Valheim is revolutionizing the open-world survival formula, and shows, in its early access, a few glitches inherent to the concept. However, its structure, which makes life easier for survival veterans and novices alike, means that the title can appeal to a fairly large audience.

Fully playable for solo players, who will be able to create their own world, the game takes on more depth and fun in cooperation, on dedicated servers that can host up to 10 players, who can also choose whether or not to activate a PvP mode. A pretty good idea to further vary the experience, which should grow rapidly, both in light of the game’s dazzling success and the roadmap already unveiled.

Without upsetting the fundamentals that have dominated survival games since their creation, Valheim offers an approach that is not always obvious, but is sometimes more accessible than usual and, thanks to a few good ideas, manages to make the most of the game with the help of an attractive universe, a real depth in the evolution of your character and the possible constructions. If you are not hostile to the principle of early access, sold at a low price, in this case, know that Valheim already offers a very stable and complete experience, which will grow over time, and that you will be able to go through it both alone and with a generous handful of friends. So keep an eye on it over time.