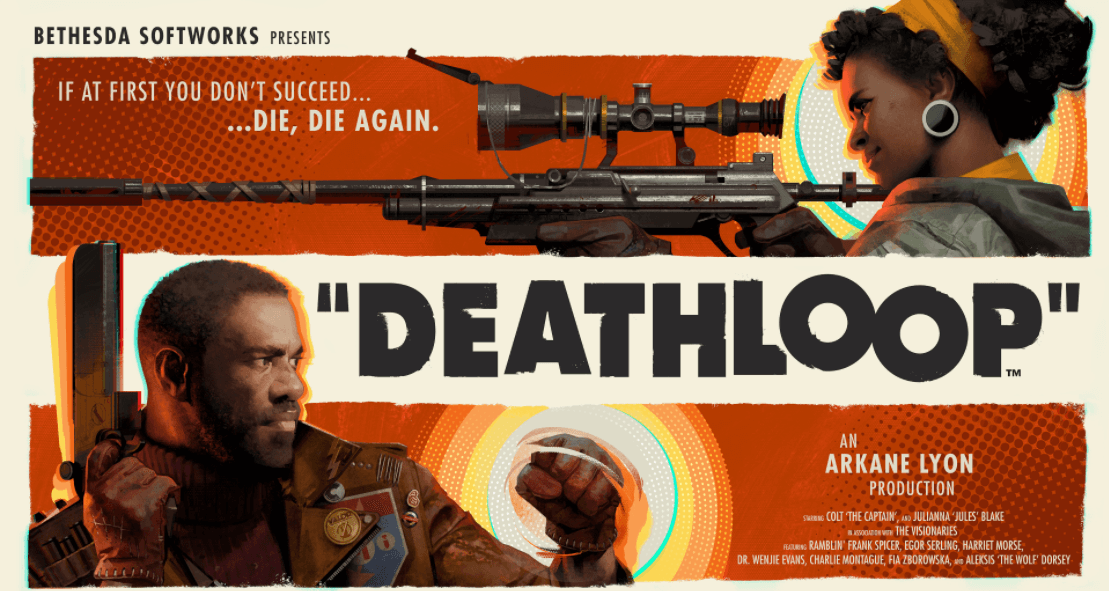 Like some rare big names in the industry, the Arkane studio had wisely chosen to put down the blade of vengeance, and to put an end to the Dishonored adventure for a while after two major installments and a spin-off that will undoubtedly remain in the memory of those who accompanied Corvo and Emily in their redemption. Unveiled at what used to be called E3, Deathloop intends to take over the narrative FPS. Gone is the Victorian England, this time the inspirations come from the 1970s, and the change of style is, at least on the visual level, spectacular. Being one of the first PS5 exclusives, will Deathloop be able to avoid the pitfalls with the same malice?

Imagine that whenever you die, you wake up in the same place on the shore of a strange island. This is the main idea of the game, where our hero Colt has been locked inside an infinite loop, and wants out of it in any way. Why he wakes up every day to repeat the events of the same day again and again, what is the secret, and what is really happening on this island. If you are a fan of time travel stories and you like games with mysterious events, this game will draw you from the beginning, as it did with us.

This is not a game of levels, but a game of thinking, investigation and experiments. Every time you play, you may discover something new that draws you to go and investigate. The game has only four maps, but each map will vary depending on the time of day, where the game offers four different periods, which are early morning, noon, afternoon, then finally evening, but what is the importance of dividing the game for periods?

This is what really makes the game special, as depending on your task you may need to go to a certain area during a certain time of day, because it may be the only time that lets you perform the task. For example, a certain door may be open in that period for some reason, or a certain person may be visiting a certain place in that period. The game will excite you in the way it breaks down and presents the story, the more missions you complete, the more you discover new details that will make you put more hours into the game.

The game also includes a multiplayer mode that resembles the invasion style of the famous Dark Souls series. The second character in the game is called Joanna, and for some reason, she tries to kill you every time she appears, she doesn’t want you to break the cycle of time that you were trapped in for some reason, and this is one of the puzzles of the wonderful story. However, you can play as Joanna, where you invade other players during their solo play and eliminate them and prevent them from breaking the cycle.

There are some annoying aspects of the game that could have really been avoided. For example, after finishing every mission you need to return to the starting point to move to the next period, and although the levels are small and the distances traveled are not large, but in some circumstances it was annoying, so I wished I could finish the period from anywhere in the map. The second point is that I sometimes felt that the tasks were divided too much, especially with frequent visits to the same place so often, then to cross the entire map to read a paper and then return to the starting point will seem a bit boring.

This is one of the games that I can’t talk about much in detail, I might easily burn the story to you, so let’s stop talking about the details of the gameplay system here. Death Loop offers beautiful graphics and a distinct artistic style, which is complemented by the wonderful music tracks and voice acting of the characters. The game’s menus may initially seem complicated, but with a little progress in the game everything will become clear, and you will need the menus here to understand the story of the game to a greater extent.

The game may not appeal to everyone, and so are the stories and time-traveling games in general, but if you know that this is the source of your pleasure, do not hesitate to immerse yourself in it.

With Deathloop, Arkane brings a decade of expertise to a new license that manages to impose its style smoothly. Perfectly balanced between investigation, FPS, and science fiction, poor Colt’s looping adventure is unlike any other. Between retro design, cheeky colors, and soundtrack as discreet as it is successful, it is an understatement to say that the artistic direction of this single adventure is likely to leave its mark. By multiplying the loops, the feeling of familiarity does not cease to rise, even if it means getting tired in the last hours of the adventure: despite its changing aspect, Blackreef Island could almost give us the impression of being cramped. In spite of this repetitiveness, which is typical of a worked and surprising narrative, Deathloop manages to establish its style, in every sense of the word, and one would have to be very difficult not to enjoy one of the most singular adventures of the year.