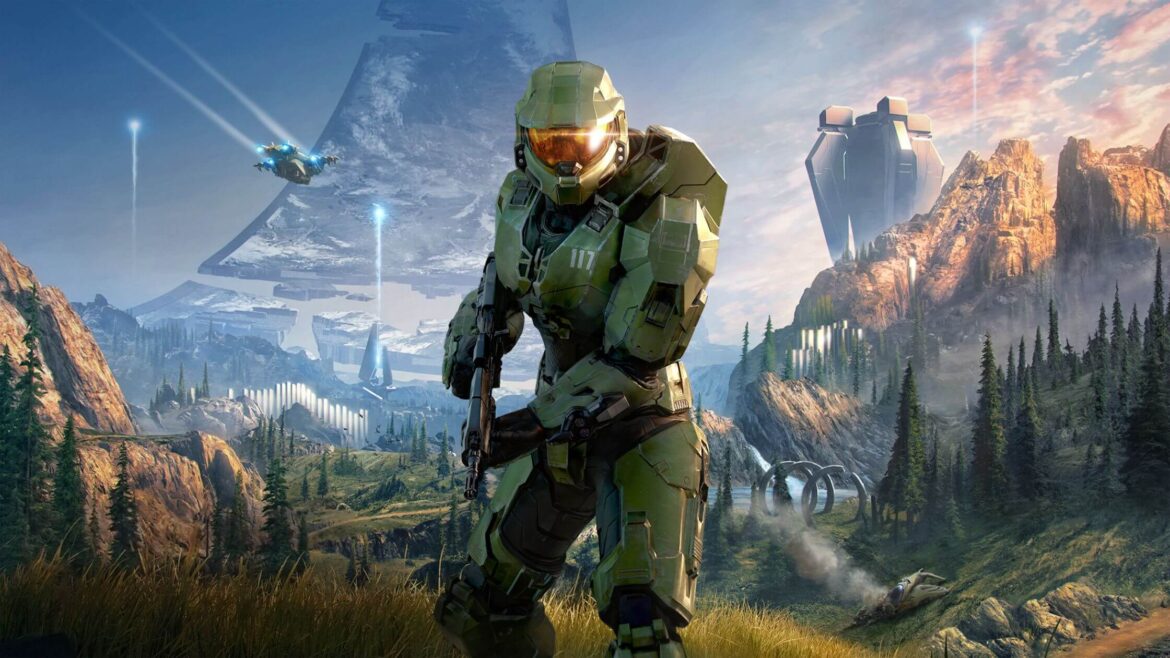 Anticipated for many years by Halo fans, Halo Infinite was supposed to join the release of the Xbox Series X|S a year ago. But that was before an unfortunate announcement, and a pandemic, changed everything. After another year of waiting, Master Chief fans and the generally curious can finally discover what 343 Industries has been up to during this extra year of development. On the menu, a title that innovates while respecting its elders. Please note that the multiplayer mode of Halo Infinite has been available in Free-to-Play for several weeks now, so this review will only focus on the game’s campaign.

Last month, Halo Infinite’s campaign opened to the press for the first time. This preview session gave the opportunity to discover the first hours of the new adventures of John-117. And it appears here that the opinion given in our Halo Infinite preview has been confirmed by the game as a whole. Halo Infinite is the continuation of the story told in Halo 5: Guardians. But no more two-hero games. Here, it’s all Master Chief, all the time. In the interest of not spoiling, it would be fair to say that humanity has seen better times. But this does not affect the Major’s motivation. The latter is going to engage in a fight that seems to be lost in advance against the Pariahs led by Escharum.

Characters with a lot on their plate

From a narrative point of view, our good impressions from the Preview are confirmed here. Halo Infinite expands the character of Master Chief and makes him even more charismatic. The writers even chose to make him ironic at times, which gives him a touch of humor (most of the humor in the game comes from the enemy forces though). The motivations and thinking of Escharum, the leader of the Pariahs, are also developed. He doesn’t come across as a bad guy who needs to be eliminated just because he is bad.

And the Weapon, who takes over the role once occupied by Cortana, is not really the same character at the beginning and end of the campaign. And even though the game takes place sometime after Halo 5, questions asked in Halo 5 are answered here. As for the pilot of Echo 216, the player does get to know him better over the course of the game. But he is more of a tool than a real protagonist with his narrative arc. It would be interesting to be able to involve him more directly in the plot of an eventual Halo 7. And, by the way, it is possible to wonder why his very pronounced latino accent in VO has totally disappeared in VF.

If it’s true that the part of the game we were able to cover in the Preview gave a definite impression of freedom, this impression is more measured on the whole game. The last missions of the campaign appear as a series of closed environments with relatively similar settings. The variety of environments or situations experienced in Halo 3, for example, is not felt here. Moreover, the open map of Halo Infinite does not really correspond to an “open world. It is more like several open areas. Each with enemy bases to take, Pariah leaders to eliminate, etc. Completing optional objectives serves to collect bravery points. And reaching bravery points levels allows unlocking access to weapons or vehicles. These can then be requested from a captured base.

Killing enemy VIPs also gives the opportunity to unlock weapon variants. Avid players can also take advantage of exploring optional objectives to pick up audio recordings. These deepen the lore and expand on what happened to the humans and the Pariah. This open area system works well, it is a mechanic already used by many games. It is only a pity that the passage from one zone to another is not simplified. When an enemy base has been conquered, the quick move to it is unlocked. However, it would have been nice if there were more flying vehicles on the map to allow you to fly from one area to another without using fast travel.

A historical feature appreciated by Halo fans since the beginning is the possibility to play through the campaign in local co-op. Later, the option to cooperate online via Xbox Live was added. While 343 Industries kept the ability to cooperate online in Halo 5: Guardians, the local co-op was removed. This caused a strong protest from players. The Microsoft studio got the message and promised to bring back this feature in Halo Infinite. But at the time of writing, online co-op is not available in this latest title.

343 Industries has of course confirmed that these modes will be available in the future via updates. However, these updates are not dated and it appears that interested players will have to wait many months before they can enjoy them. At the moment, the arrival of co-op in the campaign and the Forge mode is only promised. At the time of testing, Halo Infinite may therefore leave the impression of an incomplete marketed game. And we could have done without this impression, as the game is otherwise enjoyable.

One of the strengths of the Halo license has always been its gameplay. And it could well be the greatest strength of Halo Infinite. Here, the pleasure of playing is immediate and the typical sensations of the series are present. This is even stronger because the developers have made several changes to the gameplay. In addition to modifying the behavior of certain weapons, and modifying the structure of the environments, 343 has added new features to Master Chief’s armor. These abilities are unlocked as the campaign progresses and are optionally upgraded by obtaining Spartan modules hidden throughout the game world.

These abilities allow the Major to grapple onto enemies, vehicles, objects, or the environment with a grappling hook, scan the surroundings for hiding Pariahs, generate a wall of protection or propel himself sideways to dodge attacks. The full version of Halo Infinite confirms all the good things we thought about these new abilities. The first attack on an enemy with the grappling hook is enough to convince you. Of course, the way to use and improve these tools will not be the same from one player to another. But there is no doubt that the grappling hook is the leader of these modules. And maybe even the star of the game. So it’s a safe bet that it will be the most used new tool for players. Especially since the game world demands its use.

As mentioned in the preview, Halo Infinite’s open-ended structure brings variety to the way we approach battles. This same opening adds an obvious sense of verticality to the exploration and combat phases. Master Chief’s additional “powers” also make the confrontations more nervous. While fortunately retaining the grip and physics specific to Halo. The combination of enemy AI, physics engine, weapon effects and grappling hook enhances the “sandbox” aspect of Halo Infinite. Players are indirectly invited to try new things. These things can be used to make spectacular eliminations as well as to imagine ways to optimize movement. It would not be surprising if the expression of the players’ creativity in Halo Infinite would manifest itself over the next few months on social networks.

The game offers a wide range of weapons, both familiar and new. And even among the known weapons, some of them don’t necessarily behave the way they did in the past, so 343 Industries had the right idea to integrate a shooting range into Halo Infinite. This allows you to learn how to master the behavior of the different weapons in the game. The process is done through three exercises and as a scoring dimension has been added to this mode, the desire to improve your score is immediately felt. Therefore, the player improves his handling of the weapons without even realizing it. Pretty smart.

When it comes to the making of Halo Infinite, there’s no need to go over what happened in July 2020. Those who need a refresher on that will get it in our preview of the game. It’s worth mentioning, however, that the FPS has clearly improved graphically since then. Texture sharpness and lighting quality have been improved. The lighting is more refined and the contrasts and reflections have also been enhanced. And as for the field’s depth in the outdoor phases, it is clearly more important than in the previous Halo. The overall result is much better and some sequences are really pleasing to the eyes. Of course, the impression made by the game’s rendering is reinforced when using an HDR-compatible screen.

On Xbox Series X, the game is globally clean. Its framerate is also stable, for a fluid game experience. with a good field’s depth during the outdoor scenes. That being said, it’s impossible to forget the fact that Halo Infinite is also released on Xbox One has an impact on its production. The game never gives you a visual slap in the face and makes you think you’re in front of the first new-gen Halo. Of course, the opening of some of the environments does not help in this respect either. The game from 343 Industries appears on Xbox Series X as a sharper and boosted version of an Xbox One game.

As for the music, we said in our preview that the musical atmosphere reminds us more of the Halo games from the Bungie era than those produced by 343 Industries. This impression is confirmed in the full version of the game. Many of the songs and themes are reminiscent of Martin O’Donnell and Michael Salvatori’s compositions. And we’re clearly not going to complain about that. However, there are also some newer tracks that are added to the familiar sounds. And there too, there is nothing to say. Overall, the game is musically calm, with tracks that pop at times. For Halo fans, the atmosphere is undeniably authentic.

With Halo Infinite, 343 Industries has done a very good job. However, circumstances made it difficult for them to do so: cross-gen release, pandemic, repeated team changes, etc. Even if Xbox Series X and PC players might regret that the developers didn’t try to offer a 100% new-gen game, Halo fans would be very wrong to miss this adventure. The campaign is pleasant to follow, with characters that seem to be more polished than in the past. And it would be a shame to miss out on the gameplay, which is a real success.

On one hand, Halo Infinite marks a return to a style and an atmosphere closer to what made the series famous and popular. On the other hand, it offers a new structure to the campaign, brings new elements to the gameplay, and significantly changes the tone of the narrative. And its great success lies in the way it combines respect for tradition and embracing the modern world. It’s just a shame that the game is released without co-op, an essential element of the experience for many players. 343 has certainly promised to integrate it later on. But there’s no telling how long it will take. That being said, players who enjoyed the Bungie-era Halo games can rush to Halo Infinite without fear. The expected gameplay sensations are not only present. They have also been enhanced. And that’s a good thing.