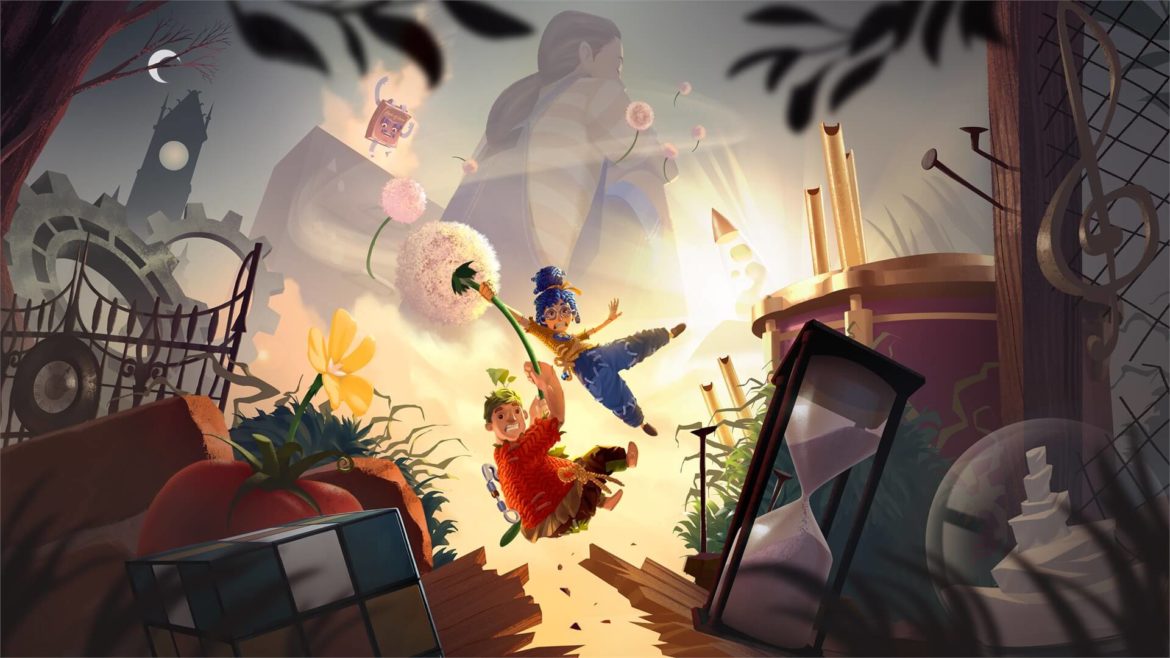 It Takes Two is the latest title developed by the Hazelight team. Exit the convicts on the run of A Way Out. This time, it’s family life. A family on the verge of divorce that will try to pick up the pieces after an involuntary spell. What to think of this tempting cooperative proposal? Is it worth the two of us getting involved? We tell you.

It Takes Two is the story of Cody and May, whose marriage will soon come to an end. A separation that their daughter Rose does not appreciate at all, and by an unfortunate spell she transfers their souls into her two dolls. One in clay and the other in wood. It is from this precise moment that begins a rocky epic with the aim of bringing our two heroes back together.

Cody and May are not alone, a certain Dr. Hakim is watching over them. Dr. Hakim is a book about love, a marriage counselor who knows all the ways to revive the flame of an extinguished love. This lively book, with its flamenco dancer look, gives the way to follow and has fun to put our heroes in trouble. The goal is to strengthen their bond. Clearly, It Takes Two should be seen as interactive couple therapy.

We can’t categorize Hazelight’s title as it plays with all the codes of the video game. It has no particular genre. It is a giant metling-pot. Sometimes rail shooter, sometimes platform game, and even RPG at times. This mix works wonderfully and brings a nice and always refreshing variety of gameplay.

This care brought to the gameplay, always linked to the subject, is felt even in the controls. Indeed, the handling is very intuitive. You will never be lost and the game will guide you as best as possible to indicate the actions to be performed. Its simplicity does not prevent it from being inventive in what it proposes as a palette of actions. Dr. Hakim intervenes frequently, his presence usually bringing evolutions in the gameplay that prevent the game from droning on.

The different phases offered are quite crazy. Some of them – without spoiling too much – like the war between the squirrels and the wasps are very entertaining, as well as the RPG phase or the time control phase. From this variety comes a desire to continue It Takes Two until its final resolution. There is the desire to know what the game has in store for us until the end.

You also need to exercise your brain because all levels offer their share of puzzles to solve. The difficulty curve is not very high, so you will never get stuck. This is one of the criticisms we can make to the title. Its lack of difficulty and challenge. However, this is “erased” by the genius and the care given by the diversity offered by the gameplay.

Was it Fares? It’s amazing!

It Takes Two also has a very nice universe. Here again, variety is the keyword. The artistic direction is definitely a hit. The environments, very well designed, offer us certain disorientation. You can walk around in a workshop, a child’s room, a tree, or a dungeon – and with consistency. Add to this the mini-games that punctuate our epic journey in order to confront each other rather than cooperate, and we find something to spice up the game.

The developers have maximized the levels through an intelligent level design. As you progress and acquire weapons or powers, you will discover puzzles related to your surroundings that can only be solved by two players. The tools and powers granted by Dr. Hakim are different depending on whether you play May or Cody and of course, they are complementary.

Some sequences – especially in “space” against the Space-Baboon – are a bit less researched and a bit boring, but this is only a drop in the bucket in a game that never ceases to amaze and reinvent itself, at a very steady pace, and in a good mood.

In case you didn’t understand, It Takes Two is a cooperative game, like A Way Out. You can play locally or with a friend via the Friend Pass where a buddy can join you without having to buy the title.

The camera can be confusing at first with the split-screen display, especially online, but you get used to it very quickly and find your bearings easily. It should be noted, however, that the lens tends to go in all directions at times and this can add to a few small collision bugs, which can be frustrating, especially during platforming phases.

The game was tested on PlayStation 5. Technically, the game appears uneven. Unlike the creatures and animated objects encountered by Cody and May, the human 3D models are not very beautiful and some environments look a bit dull. But we quickly get over it. On the whole, it’s full of details, it’s lively and some effects work particularly well. However, it should be noted that DualSense is not used to the fullest. We can feel that the development was primarily for the PS4. And that’s a shame.

The fact remains that with It Takes Two, we are faced with a generous, joyful title, whose variety never ceases to amaze. If we add to that engaging characters, sometimes even zany like Dr. Hakim, and numerous references to pop culture always well felt, we can say that we are facing a filter of love most effective.

It Takes Two is a breath of fresh air in video games, a pleasant cooperative experience that succeeds on all levels. The gameplay, minimalist, knows how to renew itself constantly with new ideas, pleasant universes, and allows everyone to play without too much frustration, with a great variety and accessible bosses. Hazelight’s game is a real rollercoaster of love, which we can only advise you to play with your other half. A romantic comedy of about ten hours that deserves a great deal of credit.

18 Most Hated Video Game Characters Ever