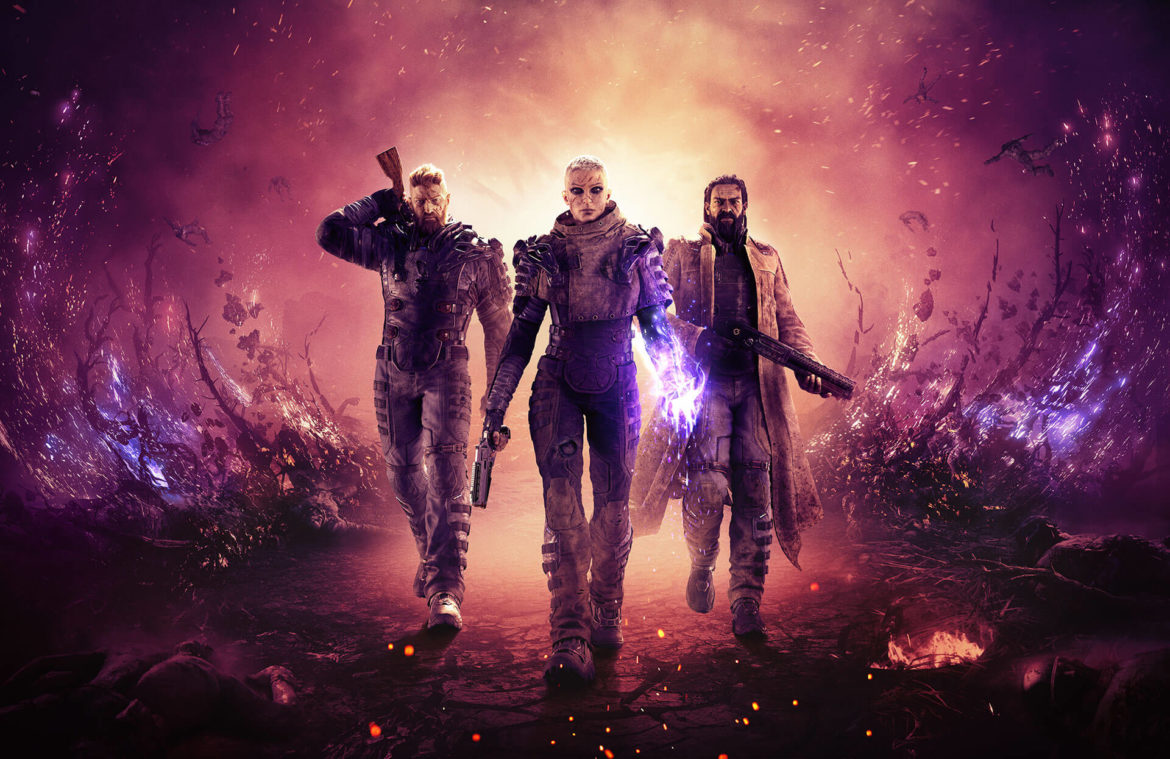 A new challenger is appearing in spring 2021 on the attractive and highly competitive Looter-Shooter market. Outriders, developed by People Can Fly Studios and published by Square Enix, is a third-person shooter with a science-fiction fantasy universe. But is this Shooter-RPG able to overshadow the masters of the genre, the Destiny and Borderlands franchises in the lead?

ONCE UPON A TIME THERE WAS AN ANOMALY

The story of Outriders begins with an Earth that has become inhospitable, causing the last human beings to flee their home for an unknown planet called Enoch. Unfortunately, the first contact with this new planet results in the appearance of an anomaly that wipes out the first settlers. Forced to go back into cryostasis to escape the energy storm, one of the last agents of the Enoch Colonization Authority (ECA) awakens 30 years later to find several major changes. As the promised paradise on Enoch becomes a hostile environment at war with itself, the Outrider discovers his new powers, abilities that may allow him to unravel the mysteries surrounding the anomaly and the exoplanet.

People Can Fly’s title doesn’t stand out for its ultimately casual story and its basic staging made of simple cinematics. The latter only punctuate the missions, and serve as a link throughout the main story, which is carried by archetypal characters and requires about fifteen hours to finish. Nevertheless, Outriders has to be recognized for the quality of its universe. If the scenario is not exceptional, the setting in which it evolves is to be highlighted. It is often more interesting to learn more about the past of the planet Enoch and about the three decades at the origin of the current situation, than about an adventure that could be summarized as a punk road trip on steroids, with what this implies in terms of writing, and therefore lack of finesse.

The planet Enoch shines by the quality of its environments and the diversity of its biomes which, with each new area discovered, surprised me by the extent of their vegetation as well as the human or non-human structures which disfigure them. It is pleasant, between two confrontations, to wander in the deserts, the forests, the swamps, and the mountains which make this star an invitation to contemplation, even fleeting. The artists of People Can Fly were inspired by many works to design this exoplanet which borrows from Mad Max, The Lord of the Rings, Destiny, etc., and thus forges an aesthetic that belongs only to Outriders. The result is a punk sci-fi fantasy universe that is both intriguing and seductive.

While never claiming to be a Next Gen visual slam, Outriders does justice to the power of the PlayStation 5, Xbox Series and PC (depending on their configurations) by displaying vast game playgrounds that are all too often empty, save for enemy forces. Developed with Epic Games’ Unreal Engine 4, Square Enix’s title does well with visual effects. The latter transform the emerging powers of the agents and warriors into a real “sound and light” show at 60 frames per second, all in dynamic 4K, except on Xbox Series S, of course, with a floating resolution up to 1440p.

However, the proven instability of the first versions of the game is to be deplored. Several technical problems, often server related, spoil the Outriders’ adventure on the planet Enoch. The CE-34878-0 error (on PlayStation system) is the cause of several crashes, which in a 100% connected experience quickly becomes a major problem. It is also recurrent to have to restart the game, the problem being that a connection, which is mandatory by the way, fails for some unclear reason.

PC version: DLSS for GeForce RTX cards
The PC version of Outriders comes with an option that GeForce RTX graphics card owners are getting to know well: DLSS. This “magic upscale” designed by Nvidia allows the game to run in a given definition while being calculated in a lower definition by the computer. The deep-learning then takes care of improving the rendering to reach the requested image. Outriders offer 4 levels of DLSS settings: Ultra performance, performance, balanced, and quality. It’s up to you to choose the right option, depending on your GPU and the level of fluidity you want. As with the vast majority of recent games using DLSS, the difference in rendering with the “native” definition (without DLSS) is almost imperceptible, especially if you play in 1440p or Ultra HD/4K. In “4K”, with DLSS set to “performance”, Outriders can reach and exceed 60 fps with the GeForce RTX 3060 Ti. We have mostly tested the game on a GeForce RTX 3070, which has no problem exceeding 80 fps in this definition. On a GeForce RTX 2070 Max-Q (for laptops), in 1080p, DLSS is less interesting and only allows to gain a handful of fps, but still allows to slightly exceed 60 fps.
Remember that DLSS on Outriders can only be activated if you use a GeForce RTX graphics card (from 2060 onwards). People Can Fly recommends using an Intel Core i7-7700 or AMD Ryzen 5 2600X processor to play in 1080p, as well as a GeForce GTX 1070 or AMD Radeon RX Vega 56 GPU. As for RAM, it’s best to count on 16 GB to be comfortable, and keep 70 GB free on your storage space. The use of an SSD is more than recommended, as loading times are very short in this case.

People Can Fly Studios has made us familiar with nervous battles in the past and Outriders is the heir to this explosive vision of gunfights. On Enoch, every confrontation is aggressive and forces the ECA agents to use their skills to survive. Outriders take the gamble of transforming the age-old system of self-healing and merges it with the supernatural powers of the avatars. Setting enemies on fire, shooting them at close range, etc. the way to recover health points depends on the selected class, which deeply changes the classic TPS (Third Person Shooter) approach. The game consciously abandons the concept of “cover” to let the full power of the Outriders be expressed. As for the feeling of weapons in hand, it only increases the feelings of power and urgency that emerge from the confrontations.

Outriders push you to be constantly mobile during the fights or you will quickly eat the dandelions by the roots. Standing still is synonymous with death on this hostile planet where all conscious creatures are constantly trying to eliminate you. We were entitled to expect a rich bestiary of dozens, even hundreds, of pests of all kinds with varied abilities, but in fact, it is not the case. The variety of enemies is mainly visual. The forces at work are too often reduced to certain archetypes and a few variants, which is sorely lacking in exoticism on such a mysterious planet, with two or three exceptions.

Artificial intelligence is also a source of disappointment on Enoch. People Can Fly balances this weakness with the number and stats of enemies who act without any real strategy. The result is individuals who rush in without any tactical approach and sometimes act against all logic. Fortunately, the boss battles, too few in number, shine by their intensity. These memorable game sequences are distinguished by their difficulty and their singularity on a planet that tends to recycle the creatures that populate it.

Cross-Save, Cross-Play: A 100% connected multiplayer experience?
Playable entirely in single player, Outriders expands in multiplayer. 2 or 3 agents can cooperate during the main story and expeditions (End Game). The cross-play, only for consoles at the time of writing this article, is also implemented by People Can Fly Studios, who have deactivated the feature on PC due to lack of stability. Players from the PlayStation and Xbox ecosystems have the opportunity to travel the planet Enoch together via a simple “code” to be transmitted to the interested parties. However, public matchmaking suffers from its chronic inability to find available players, mainly to advance in the scenario. But this problem fades somewhat once the story has been completed and the expeditions have begun. Cross-Save, a feature that allows you to transfer your saves from one machine to another using a Square Enix account, is another strong point of Outriders.

THE DISCIPLES OF ENOCH

A Looter-Shooter goes hand in hand with a constant rise in power of an avatar who gains experience, unlocks new abilities, and hunts for equipment with ever more impressive statistics. Outriders is no exception to the rule. On the contrary, it applies the fundamentals of the genre to the point. As redundant as the proposed missions are, and most of them are, the pleasure comes from the customization of the ECA agent, and from all the opportunities offered by a system that perfectly integrates the main mechanics of an RPG, starting with the presence of 4 classes (Technomage, Pyromage, Illusionist, Tellurist) that define the way of approaching fights. Beware, this decision taken at the beginning of the adventure is final. Changing archetype means starting from scratch.

These disparities in gameplay, present from the very first minutes, become more pronounced as the hours go by. ECA agents unlock several powers, 8 per class, as well as passive abilities that strengthen their hold on events. Within the same class, it is possible and strongly encouraged to carve out your own path by selecting skills, weapons, and equipment to suit your particular play style. People Can Fly goes above and beyond the call of duty in this area. The fun in Outriders comes from the loot, which in general perfectly rewards the efforts made to explore the planet Enoch, eliminate hostile forces, and complete mission objectives.

Every outing is a reward in every form the studios have devised. Weapons and equipment, governed by a rarity system familiar to RPG fans, can be altered to increase the Outriders’ power and effectiveness in the field. With crafting, buying, and reselling, there is no shortage of opportunities for agents to go beyond their basic human status. Indeed, Enoch is full of challenges that translate into a “World Level” in-game that progressively increases the difficulty, and thus the rewards that come with success. Completing the main scenario and the side quests is only the beginning of the adventure on this planet. The expeditions (End Game) are the real goal of the Outriders.

Another point that should please the players, Outriders, despite its structure and the genre to which it belongs, is not a Game as a Service, and wants to be complete at its release. No microtransactions, even for cosmetics, alter the adventure.

Outriders doesn’t revolutionize the genre and doesn’t have the ambition to do so. People Can Fly and Square Enix’s title recites the perfect Looter-Shooter lines while leaving out the Game as a Service dimension inherent to this type of game. It stands out first of all by its universe inspired by science fiction, fantasy, and the punk movement. The explosiveness of its fights, its extremely well-thought-out customization system, and its propensity to motivate players by an omnipresent power gain make this Shooter-RPG an outsider to consider. However, the basic storyline, the limited staging, the repetitive missions and the instability of the game do not allow Outriders to fully impose itself on the shooter scene.