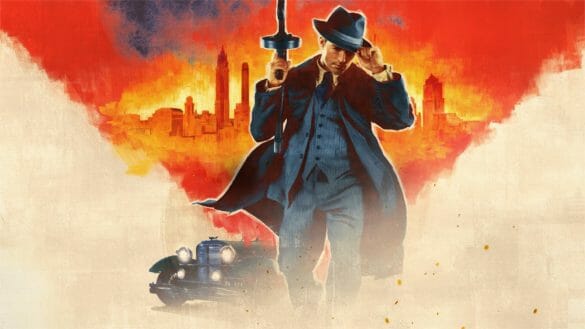 Not many will disagree that the Mafia game released in 2002 is considered one of the best games of its generation, although it did not receive much praise due to the bad version of the consoles, but everyone knows that it set new standards, took advantage of everything that could be exploited to immerse you in the game world as much as possible. It was my dream to see a remake for a game like Mafia, and when it happened I was so excited about it, despite knowing that the Hangar13 studio was the one who will develop the remake, and not the team that worked on the original version, and even the writer himself was not involved … So did I have to slow down a bit before I got my enthusiasm to reach this level? Or did the game disappoint me? That’s of course what we’ll find out next.

Set in the 1930s during the global economic crisis known as the Great Depression, the game’s story takes place in Lost Heaven, a fictional city inspired by the American city of Chicago. It was famous for the great spread of crime, the alcohol trade (which was an international taboo), and money laundering, and it is surprising that all these crimes were happening with the full knowledge of the police and officials, and corruption was as widespread as an epidemic, paid for only by the lower class of society, including our hero of the story “Tommy Angelo”.

The events of the story itself have not completely changed in the remake except for minor changes in the characters and some conversations, where you will notice Tommy’s reactions seem more realistic, the game highlights more how evil and violent the hearts of his co-workers and also “Salieri” the Mob Boss, and this is an excellent thing that the original version missed, and did not present in the required bloody form. “Sam” also looks younger with the focus on his loyalty to his boss “Salieri”, and although he does not look exactly like Sam in the original version, he was better. I wish they had left the voice performer of “Paulie” in the original version, as he was more suited to a violent and impulsive character like him, on the other hand, “Sarah”, “Tommy’s wife”, had a much larger role than the original, and this also added to the depth of the story and the characters.

Unlike the original version, you will be surrounded by a lot of collectibles, some just hidden surprises “Easter Eggs” from the other parts, and others add a lot to the story and the side characters. There is also a good amount of posters of science fiction movies in this period. The conversations in this remake were great, surpassing the original’s in the similarity between them and the tone of the gangsters of this period, and on the other hand, they were more realistic and appropriate for all the characters according to their personalities.

One of the most important pillars of the Mafia series gameplay is the intense battles between you and the gangs, which focus mainly on shooting, and contrary to what many believe, the original version for its time was more than excellent in presenting the vibe of gang wars in a smooth and funny gameplay and contains a depth that creates an opportunity for players to master it. But in the remake this system was completely dispensed with and became based on the third part on combat mechanisms and defensive systems such as covers, in addition to that your allies “Sam” and “Polly” cannot die unlike the original version, this of course made the game easier because the death of either of them means you lose the mission, but with different difficulty levels in the game, you can raise the challenge if you want, but let me remind you that you will suffer a lot and maybe break your controller in the racing mission!

Although the new control mechanisms in the game are not bad and I could see that they are smoother in the third part, but in general only one thing was flawed and that is artificial intelligence. I often notice a large variation in the interaction of enemies with my movements, some behave very cleverly and try to join their colleagues and not come out of their cover waiting for me to draw a third eye in his head, like some games! yet in other times, I find the exact opposite, where they act like I’m not there or look somewhere else, which makes you frustratingly lose your focus.

Driving cars in the original version was so great, it made you feel like you had already traveled to that time period, and its slowness was not annoying to me since there was a big difference between each car and the other, and as you progress in the game, you get better cars to drive on each mission, which was a great thing that the remake, unfortunately, didn’t take advantage of. Although the game contains a good number of cars like the original version, but their distribution in the city and their arrangement in missions was in chaos, and you can also steal any car you want at any time after the second mission like in GTA games, and this completely overthrew the progress system created by the original version. Adding motorcycles was a great thing, although it wasn’t the addition that the game really needs, but it wasn’t totally annoying, even though I didn’t ride it except for one mission where I was forced to do so. Hand-to-hand combats the remake didn’t have as much value as in the original, it’s just about repeatedly pressing one button until you defeat your opponent.

The original version has the best level design in the series, each mission has its own style of how to execute it with a big difference in the environmental design of the places you go, once you find yourself required to shoot at enemies from a high place, or on a ship and you must finish the mission quietly, and in other times you face gang members with melee weapons, and each mission was suitable for the events of the story… and this is what the remake managed to succeed cloning it, with the modification of some missions whether deleting the connecting and accompanying parts or adding some dialogues…

But I was hoping that they will add some side content that you can interact with, especially with the beautiful world is full of detail and exciting to explore the city of Lost Heaven, where they could at least add some stores like the ones from the second part, not to mention that the original version contains some side missions you get from a person called Lucas, these missions varied from theft to delivery and sometimes containing small fights, in the remake the character still exists but he will not give you any missions and instead, he will give you five places that you can steal some luxury cars from, of course not considered missions compared to the original version.

Considering what Mafia has to offer, we will find an open world intended for a greater view of the game environment of that era, which in my opinion is not a bad thing with very carefully written dialogues every time you move from one point to another as well as beautiful driving control. The remake added a completely new mechanism in chases with cops, where you see certain signs on the map that you can go to and find a set of barriers which you can jump over and leave the police cars behind in trouble and escape. But I have an observation on the mechanism of movement and rotation of the camera is lagging a little, unlike the smoothness that existed in the original version in this particular aspect. The remake suffers from heavy movement and camera rotation that may affect your performance in direct engagements and you may eventually prefer using melee weapons to make it easier for you.

The remake offers amazing lighting levels that increase in the early morning when sunlight is reflected on the roofs of buildings and cars with the glitter of water resulted from the night’s rainfall, in addition to an excellent level of physics, there are many surrounding objects that can be destroyed both on the streets and inside the buildings, which make the game looks more realistic. The facial expressions were very smooth in a way that reminded me a lot of the L.A Noire game, and also focusing in the movie scenes on eye expressions, feels like you’re in front of one of the popular Neo-Noir movies when you watch Tommy talk to one of the mobsters.

In the game, there is a day and night cycle, divided into morning, noon, afternoon, before sunset, and night, you can choose the period that suits you in Free Ride that allows you to try all the cars that you have stolen and also weapons and clothes. The character design was excellent and helped to introduce them in a better way on the screen especially Tom and Sam, and although I wasn’t impressed with Tom’s dramatic change in shape when I saw him in the first official game trailer, but over time I became more sympathetic with him than the original Tommy.

The game runs regularly at 30 fps and I had no drop in frame rate on my Xbox One S except in “The Great Deal” mission in a scene full of explosions. On the other hand, the game has problems with the design of buildings, streets and trees, will feel that they’re unrealistic compared to the lighting systems in the game, and those flaws come out to light as the brightness increases.

There are quite a number of epic melodies in the game and their employment was good whether in chases, battles, or in romantic scenes, but unfortunately, the reuse of one music in battles will make you bored with time, and you will be greatly frustrated when you find only one music from the original version.

The vocal performance of all the actors was excellent, especially Tommy’s, unlike his voice in the original game, which you will feel it’s inconsistent with the character of a criminal as you progress in the game, here in the remake he has a tone that shows how contradictory his character and his conflicting motives are, and Frank’s voice performance is also much better than the original.

The remake version has been able to present Mafia in a modern form commensurate with its value and popularity and has become one of the most important titles of 2020 so far. Despite some technical problems and poor side content it remains a unique game, it can be considered a linear game, and at the same time is not an open world, the most beautiful of it is that it doesn’t contain any RPG elements, which ruined a lot of story experiences.

The Last Of Us Remastered Review