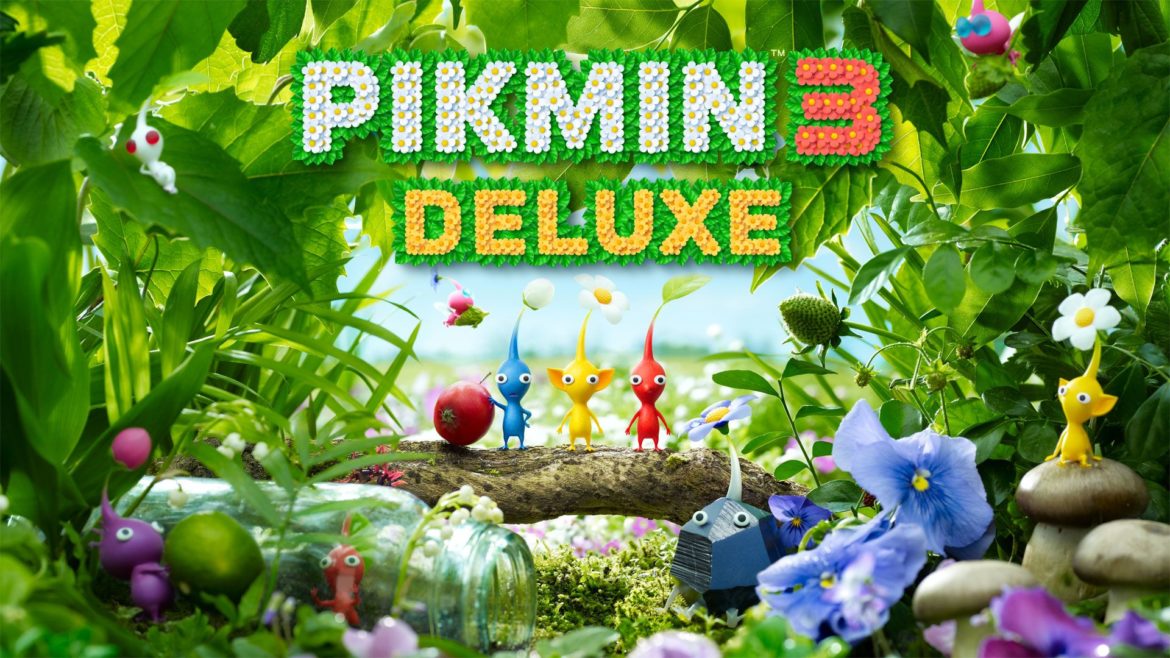 Pikmin is a strategy and puzzle game from Nintendo that reached the third part of it and this version for the Nintendo Switch is the improved version of the same game released on the Wii U in 2013 but includes all the additional content released for this part as well as 14 new missions that connect you to events between the second and the third part.

The events of this part revolve around three space characters from the dying planet Koppai due to its increased population density and poor division of supplies in it, so three astronauts were sent to visit a planet called PNF 404 rich in fruits, and the task of these astronauts is to accumulate as many fruits as possible so that they can plan them in their home planet. And as soon as they are close to landing, a technical error occurs on the ship and the three astronauts get separated and from here your adventure begins in the game.

The three pioneers are, Captain Charlie, the leader of this adventure and a brave character who is very interested in carrying out his mission and caring for his crew members and the most important members of his crew for him is his duck doll, we also have the engineer Alph, a character who puts his interest in analyzing everything he faces, and finally, The Botanist Britney, who is one of the most important characters in this journey because of his experience in plants and their cultivation.

Of course from the name of the game Pikmin are the most important factor in this series, and they are divided into multiple types and each particular type has its features, the five main ones in the story are: red Pikmin that can withstand fire and are also the best in combat, Yellow Pikmin can resist electricity and they’re the only ones that you can throw to high places, blue Pikmin are the only ones who can swim. rock Pikmin is one of the new species, it is the strongest in terms of impact on enemies and can smash any kind of crystal and glass, and finally, the flying Pikmin are the weakest of all kinds of Pikmin, but it has the ability to avoid all the odds but he has the ability to avoid all odds in which other Pikmin species fall into and they are effective in fighting flying creatures.

The game style is more like Real-time strategy games but simplified and with puzzles that are not exactly difficult, the idea is to figure out the fastest way to solve the given puzzle because every day you have is limited and the duration of the day in the game is equal to 15 minutes of play. During each day you will have several goals, the first and main for your survival and the continuation of the days is to collect as much fruit as possible, the second goal is to find certain devices that increase the radar range so that you can explore the planet PNF-404 further and visit different areas, the third goal is limited to the level itself, which includes building towers, fighting a particular leader or finding tools to evolve your skills until you expand the gameplay. As you explore this planet you will visit five different areas in the main story, each with a different touch, a snowy area, a tropical area, and an area surrounded by rivers. Each one of these areas will make you change your strategy on quests and more than the previous parts splitting the work between the three characters will make you invest your time in the day wonderfully and satisfactorily.
In addition to the story mode, you will find a competitive Bingo mode that supports local players in which you and your colleagues compete to collect points, this mode is very fun and adds a pleasant competitive layer to the style of the game, but unfortunately, the mode lacks the presence of online play that in my opinion could be a central focus of this series if Nintendo makes it available, especially at a time when people have to be careful about social distancing.

While the mission mode will allow you to visit different areas and cleverly designed levels that I see as the most enjoyable in the history of this series. Mission mode does not have the freedom that you experience in the story mode, because it is limited by a certain time to carry out one particular task, and this approach is relatively frustrating but has made the team launch into designing interesting levels and using the types of Pikmin featured in the previous parts.

Now we come to the differences and new factors offered by this “improved” version of the game, before we get into these changes I would like to talk about the game graphics, the quality of the graphics did not differ to anyone who tried the original version on Wii U but it is generally impressive and still beautiful even after 7 years. Of course, some areas have a poor quality compared to the rest of the game environment, but it is not bad to the point of hindering my enjoyment of the game in general, let’s now go back to the changes, first with the disappearance of Wii U gamepad the map is now on the screen, In addition to that the selection feature has become more accurate and interact with the player very quickly since we mentioned the control you can choose between two types, the first is the traditional control methods where you control the joysticks to move the cursor and the rest of the commands via buttons, the second one supports Kinect control where the right hand becomes the cursor and this allows you to select certain objects and weak points of monsters more precisely. Another point is the whistle you use to get Pikmin’s attention has a wider range, and finally, even if you lost a Pikmin while roaming the world, now you can go to your ship and call all the lost Pikmins throughout the level. There are other new elements like all the levels in the game supports the game coop-mode, finally, the last new thing other than the new content, is the return of Piklopedia and this is a dictionary or reference for you which have all the pieces of information and opinions of the characters about fruits and creatures that you collect and encounter in your journey. The return of Piklopedia is very welcomed and I spent a long time reading the opinions of each character about the strange creatures of the planet PNF 404.

The additional content with 14 missions led by Captain Olimar and his assistant Loui was frustrating, it contains some funny cutscenes and a slight difference in sound effects, but the levels you pass during the game are the same as the basic story levels, and yet limited because many parts of the level are closed, design of these 14 missions is very similar to the mission levels available in the first version in 2013, each mission only forces you to accumulate a certain number of treasures or kill all the enemies in the zone during a specific time, making it something repetitive for anyone who has played missions before.
The game moved on to Nintendo Switch successfully, and provided additional small touches that made the game better overall and have a smoother experience, reduced the hard work for the player, and focused more on giving more opportunities so he can enjoy this special experience. Also, these new elements make the game smoother for the experienced players and made it more welcoming for players who have not experienced the game and fall in love with the creatures of Pikmin, a final point that was satisfying is the addition of a new difficulty level that limits the number of Pikmin to 60 and increases the strength of enemies, other difficulties allow you to play with 100 Pikmin.