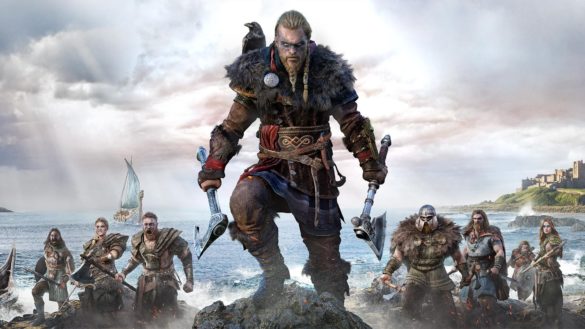 Assassin’s Creed series returns to us after two years of its last releases and the Valhalla is the 12th part of this long-standing series and after more than three years of development from Ubisoft Montreal studios this part comes with the end of a generation and the beginning of another new one, can the game offer a special experience after this waiting time? that’s what we’ll find out in the next lines of this review.

The story in this game revolves around a character named Eivor in the period of the Viking’s invasion to Britain, and the events put you in a conflict between the Assassins and the Templars, and their constant battles in different historical periods and different names, the story was presented in an interesting style and with several surprises and shocking events every time, with the freedom of choosing decisions that you will see their impact on some of the events of the story, your main goal in the game is to work on finding allies from different regions of Britain and each region has its own story chapter and missions that you have to complete to get the loyalty of the people on this region and their support for the rest of the game, and the main story offers various missions and new ideas to avoid involving you in any kind of repetition.

Besides the main story missions, the game will offer you many side missions in a direct and indirect way, the cause will find some characters marked by a mission sign on the map, and others you may discover by chance when you’re exploring the game world, and here the level of these missions varies a lot, there are a lot of traditional monotonous missions like killing a someone or freeing a captive at some camp, but at the same time there are some special missions that offer new ideas and may need a lot of time to accomplish. You also have an option to play in a fantasy world with legendary characters from the Viking world but it remains a Side Story option that you can avoid if you didn’t found it very interesting.

One of the most importing things that the developers tried to offer in this part is the freedom in everything, from the options and settings of the game like the choice to activate the blood and choosing the difficulty of the direct combat separately from the stealth mode difficulty up to choosing the hero you want to play with whether a male or a female, and also switching between them during the story, and of course, you can customize the look of your character using different tattoos and unique hairstyles.

The game world is full of various events and missions, hunting, battles of legendary monsters, and even entertainment stuff and side games such as dice games or even poetic duels that were famous in that era and that will gain you some additional points for the fame level of your character that will help you in the future to find an additional option for conversations to complete some missions in different ways. When you arrive in England you will create your own village and you will gradually develop it by bringing the different resources from the battles or Raids you make with the members of your clan, and you will also need to find different resources for the blacksmith to upgrade your armors and weapons to keep up with the challenges coming next in the story.

The gameplay system of this game was improved and the character’s movement became smoother with endless choices of skill upgrades using the development points you get from completing various quests exploration.

Raids and invasions are the most prominent additions to this version because the battles now are epic wars on enemy fortified castles with a large number of fighters from both sides, and you have to use the available gear to break into the defenses of the enemy and the defensive locked doors, and in some castles, you need to break into several doors to reach the enemy’s leader and kill him to finish the battle. And as for the raids, it is your preferred choice to develop your village by attacking other villages and some residential areas with your clan members and storming and plundering their wealth, and taking all their resources.

The game has a lot of different and beautiful environments and with the additional lighting level that we have never seen before which adds beauty to the spectacular world of the game, because the sunset and sunrise and the reflection of lights on surfaces and grass in a special way increase your fascination with the details of this world that was perfectly designed.

The voice actors provide a good acceptable and expected performance, there was no special element or performance superior to others but all of it in a good and acceptable way, as well as the sound effects of the clash of swords, battles, and other pulses of sounds much realistic by interacting with the surrounding environment such as waterfalls and others, and your crew is doing something new this time, and that is telling amusing stories, and you can hear their laughter on them, and of course, interrupt them if you want them to shut up. You don’t feel the raging and violent Viking music in the game, but most of the melodies are faint and soft, and not much affecting the emotion of the story or the battles, which is of course a disappointment for me after I expected the opposite.

The new part of the beloved series Assassin’s Creed offers a great pleasure in exploring some fantastic environments that were well designed and stunning graphics wherever your eye falls, besides enjoying a lot of raids and the flow of fighting with bows and arrows. However, it can put the series at greater risk and threatens its identity due to the weakness of the stealth mechanism and infiltration and all the mechanisms that Assassin’s Creed is known for, and also it has a very long story but it’s kind of empty and boring and you will not get attached to the hero quickly.

Well, the experience on the new generation consoles was better than the playing it on the current generation for sure, but it also has its technical problems that we faced like a small decrease in the number of frames in big battles and raids with a large number of fighters, and we also encountered some situations when you do missions with your allies and they get stuck in a tree trunk or a locked door and that makes you unable to finish the mission because of that bug.