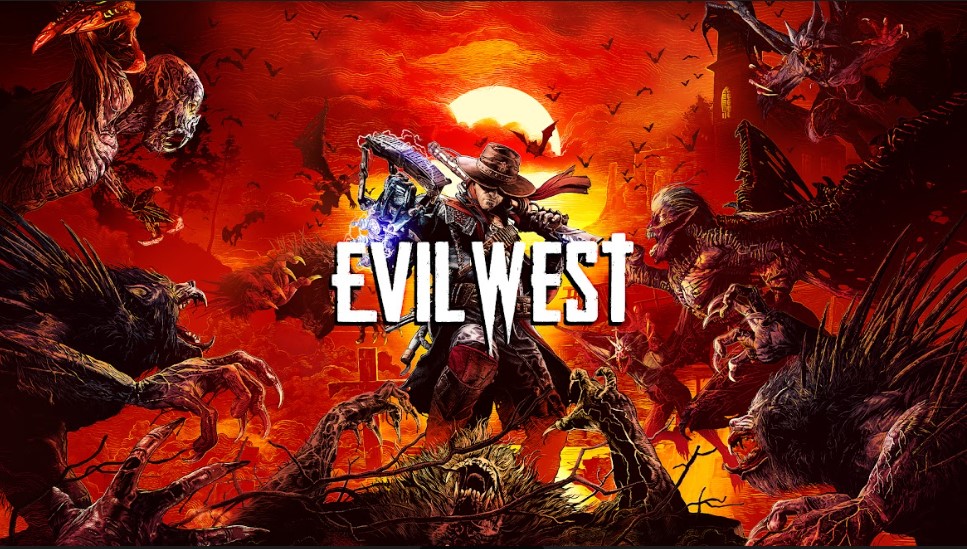 Evil West is a game which, as its name indicates, takes place in what is commonly known in the cinema as the Weird West, a hybrid genre between the classic western and fantasy, even horror. A clever mix that will make your mouth water if you have any affection for the western conquest history.

Because Evil West is nothing more than Clint Eastwood in Dracula or Van Helsing in cowboys, depending on your vision of things. In this game that says it all in its title, we find ourselves in an American West, gangrenous by evil forces in which you will have to hunt monsters and especially vampires. You play as a hunter named Jesse Rentier, working for the Rentier Institute, a sort of Extraordinary Gentlemen’s League whose objective is to fight evil anywhere it appears.

Despite this interesting background, the strength of the game is clearly not in its storyline, which fits on a postcard. Overall, the narrative is worthy of a comic book, with characters that are as cartoonish as possible throughout your adventure. But the whole thing is totally assumed by the Flying Wild Hog studio who already charmed us with Shadow Warrior which has exactly the same codes.

The main difference with this other title from the Polish studio is that this is a third-person shooter and not an FPS. This is mainly due to the fact that many combat phases can be performed in hand-to-hand combat and that the TPS mode makes the whole thing a bit more epic. Because in addition to guns and crossbows, our dear Rentier can also take out his rage on enemies directly with his fists or with metal claws like Wolverine. Clint Eastwood yes, but boosted like Schwarzenegger in Conan. Our hero is a real beast who can use many skills such as electricity to defeat vampires and demonic vermins (werewolves, giant insects, etc.).

This work can be simple if the appropriate gauges are charged (via a cooldown). The feeling of power is all the more impressive as the game has no stamina gauge, so your character is almost unstoppable and all the difficulty is based on the system of feints, dodges, and combos. During an encounter with an opponent, red and yellow arrows around the hero indicate which nearby opponents are attempting an attack. This gives you some time to prepare yourself.

In addition to his hand-to-hand power, Rentier is also a John Wick with great firearms skills (in the purest sense of the word with the use of a flamethrower as well). Sniper rifle, shotgun, big gun, the whole arsenal is used to kill your enemies. However, we regret that there is no weapon reloading system, just like your hand-to-hand combat, everything is reloaded via a gauge. This is very limited and frustrating for a game of this type with a big notion of shooting. As a result, the gunsfights with humans don’t have much flavor and we lose a good opportunity to pay tribute to the western genre, it’s really disappointing. This is probably why hand-to-hand combat is strongly recommended in Evil West, with many skills such as the ability to teleport on the opponent to deliver a fatal blow, among other things. Ranged weapons are actually quite secondary. Sorry for the shooters or spaghetti western fans.

Technically and artistically, it’s a success and we’re a bit in the same context as Shadow Warrior on this level, i.e. fights all the time, non-stop, and at high speed that don’t really give you time to linger on the details of the scenery and your environment anyway. In any case, it’s very convincing, especially with a nice bestiary that allows to vary the pleasure of encounters and fights. It’s dirty, ugly, and tricky, in short, it’s what we expect from monsters. Special mention to the blood management, that the gore lovers are reassured, there is hemoglobin in cubes.

Evil West is a rather basic 3D beat’em up that won’t ask you to go back and forth or to break your head in exploration by offering you several possible paths, since the game is the actual definition of linearity. You have a set path and there is no way to get out of it, it’s almost like a game on rails and that’s a shame. One would have thought that the western context was a good opportunity to offer the player large environments with crossroads. The RPG part is also reduced to its bare minimum, so don’t expect to spend hours in the menus or in your inventory. You quickly unlock a skill in a clear way and go back to beating the crap out of the clock. No fuss, the descriptions are minimalist and the action (and violence) is the core of Evil West.

The presence of numerous bosses and mini-bosses is a real pleasure with nice difficulty peaks, you can be facing many of them at the same time sometimes. As for that, there are four difficulty levels available and you should count on ten hours of play on average. The game is neither too simple nor too complex, it adjusts its difficulty perfectly, which makes it a game that doesn’t require too much brain work.

Evil West is a nice experience, it’s a bit like a popcorn game that you can enjoy without really thinking to relax and it does the job perfectly. If on the contrary, you are looking for something subtle and tactical, then run away because this title is as subtle as an elephant in a china store.