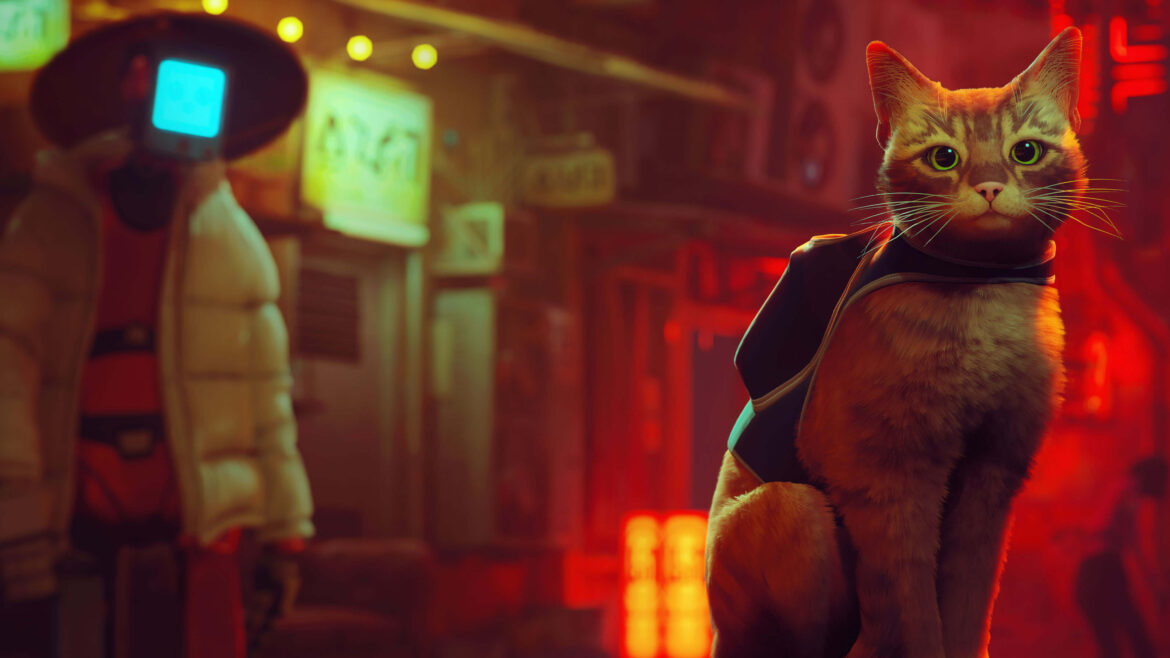 The video game industry in Montpellier is definitely on the rise these days. After Magic Design Studios and its rogue-like Have a Nice Death, it’s the turn of their neighbor BlueTwelve Studio to propose the fruit of their work to the world. We are talking about Stray, the famous “cat game” that has intrigued so many players since the first trailer appeared in the summer of 2020. Two years later, it is finally possible to slip into the skin of this cute cat and discover a really interesting and well-made futuristic world.

Everything starts as a cute and bucolic journey, set in the middle of the countryside. A tribe of cats wakes up, we embody one of them, and our first steps in the adventure consist in lapping a puddle, giving a few playful paws to our fellow creatures, and giving them a few licks. So cute! But then, one wrong step later, our feline and orange hero falls into what seems to be a bottomless pit. He then wakes up trapped in a walled and forgotten city. It’s time for the player to discover the real world of Stray, which is both post-apocalyptic (humans are long gone) and cyberpunk (humanoid robots called Companions have replaced them).

Plants, genetically modified to be able to grow under artificial lights, bring some nice touches of greenery, but the general atmosphere remains essentially urban. The total absence of sunlight imposes a permanent night, an artificial dome awkwardly replaces the sky and the stars by a few punctual lights, colored neon lights are reflected in the puddles, and the extremely vertical architecture evokes the most populated Asian cities of our current world. The result is absolutely beautiful, both technically (the game is extremely fluid in terms of what is displayed) and artistically.

The streets are full of details, the colors are always carefully chosen, the level design is clever because it’s deceptively cluttered, and the Companions with cathode-ray heads have a crazy class. And our cat in all this? Well, he is very pretty and perfectly animated! From the swaying walk to the frightened round back, you’d swear you were dealing with a real cat. It must be said that the developers did not hesitate to integrate most of the typical behaviors of the domestic tigers in the game.

SHALL WE PLAY CAT ?

You can meow at will, drop objects, walk on a computer keyboard or piano, scratch sofas, sack a game of dominoes, rub against the legs of some robots (and then make a heart appear on their head-screen) and make others fall by passing in their legs while they were moving quietly. Even sleep, which is the main activity of cats, has been integrated into the game. Indeed, it is possible to rest in different places, which could be described as meditation points. And this is not just a gimmick, as the camera field slowly widens, giving us a better understanding of the local architecture, and even some clues to solve the current quests.

There are indeed several missions to complete during the adventure, the main one being of course to escape from the city. But the game relies on the player’s intelligence and doesn’t impose any quest log, NPC markers or GPS. There isn’t even a map to get your teeth into, and that’s good! Exploring the world and interacting with the bots becomes all the more natural. Every moment when you get lost is an opportunity to admire the scenery or to discover new shortcuts.

While some developers would certainly have used the pretext of the cat to serve us a sixth sense like “detective vision”, BlueTwelve Studio never betrays the name of the game and really lets us wander at our leisure. Playing as a cat also offers an interesting point of view and some quite original camera perspectives, especially when interacting with the Companions, who necessarily look “giant”.

While most of the adventure consists of exploring the world, notably by jumping on gutters, air-conditioning extractions and other roof edges, Stray also offers several additional game mechanics. At the beginning of the adventure, we have to solve some very simple puzzles, by carrying small objects between our teeth, or by walking inside empty cans in order to move them. We think that the game could quickly go in circles, but the Cyberpunk universe comes fortunately to the rescue of the gameplay.

The futuristic technology allows for some welcome fantasies, without the delirium ever being pushed too far, which could have quickly become a contradiction with the fact of playing as a simple cat. A good balance has been found thanks to B-12, a very nice drone that allows the cat to understand the dialogues of the robots, that translates some inscriptions for him, and that, unlike our four-legged friend, can hack the door locks or enter the digicodes.

There are even some enemies to avoid at first, and to face later. Called Zurks, these funny bugs are halfway between the tardigrades of our real world and the head crabs of Half-Life. On several occasions, Stray reminded us of the best Valve productions, Half-Life and Portal in particular, whether in the color choices or the general atmosphere. It’s enough to say that we feel particularly well, and that BlueTwelve Studio’s first try turns into a real masterpiece.

LITTLE SCRATCHES IN THE CONTRACT

Does this mean that we have the game of the century? Not far, not far… but not quite! We have two major criticisms to make about the adventure, just to justify the expression “he who loves well spares well”. The first one is about the jumps, which don’t give us as much freedom as we would like, since it is only possible to jump on the platforms that are designed for it. There are plenty of them, but you have to aim at them and wait for an icon to appear to confirm that you can jump on them. We would have preferred to be able to make vouchers at will, even in a “useless” way.

The other concern comes from the way some quests are carried out, which we did “backwards”. Some actions can be performed without really knowing why (although they make sense in the context of the mission we learn about later), while sometimes we bring an NPC an item before he has even asked us for it. On the other hand, and in a much more anecdotal way, we could observe some collisions or camera placement problems on rare occasions. As for the duration of the game, we were a little disappointed, since it is possible to finish the adventure in less than five hours if you decide to ignore the robots’ requests and only do what is necessary, while six hours are enough to discover everything in the game that you can do. At least Stray avoids tiring the players, who will keep excellent memories of it.

Charming and brilliant, Stray reminds us that a small and well-made indie game is sometimes better than a big AAA game. Especially when the title in question offers us to play as a cat in a post-apocalyptic, cyberpunk universe populated by friendly androids. The journey is extremely pleasant, the narration is efficient, the characters are endearing and the graphics are attractive, while the developers were smart enough to never take the players by the hand. There are a few small flaws here and there, but the whole thing still deserves respect. Totally essential for cat-owning gamers, BlueTwelve Studio’s game is also highly recommended to all the others. I can’t wait for a sequel, a dog version or, more simply, the next game from the studio, whatever it may be!