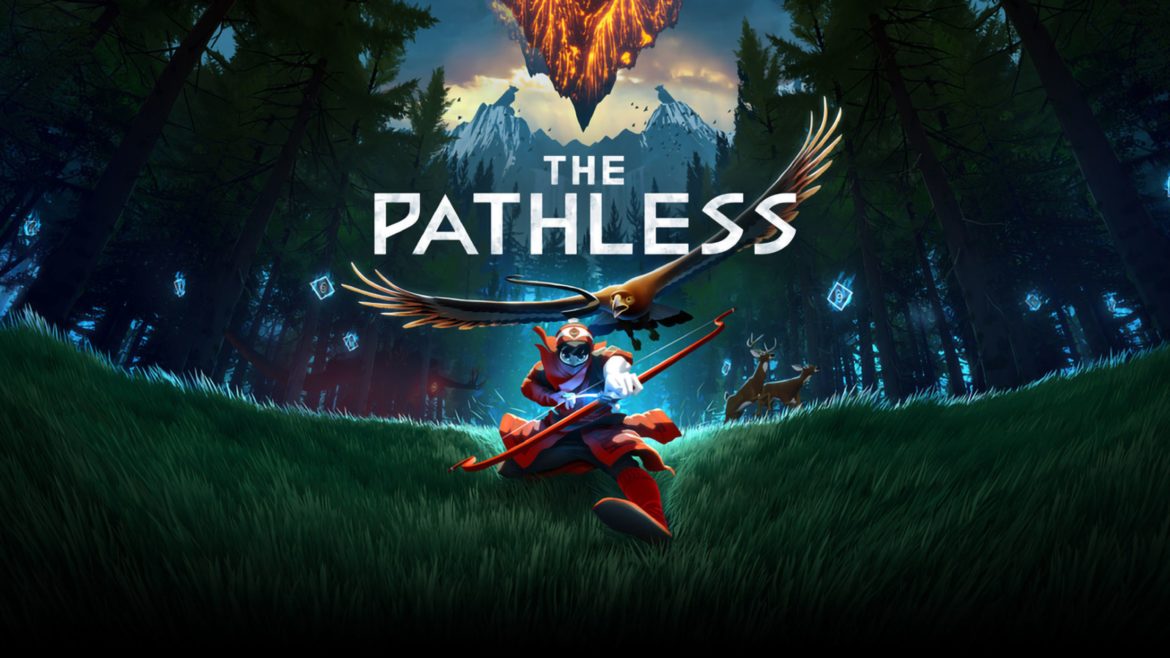 In 2012, artistic director Matt Nava developed, under the leadership of thatgamecompany, a certain Journey, a poetic work that quickly seduced both the press and the players with its assumed graphic paw, its touching story, its fabulous musical compositions, and its original multiplayer part. Building on this success, Matt Nava, along with several members of his team, including the composer Austin Wintory, decided to found Giant Squid, his studio, to propose his vision of the world. From there, a first project was born in 2016, the contemplative work ABZÛ, which, unfortunately, undergoes the inevitable comparison with his elder Journey. Four years later, Matt Nava, well aware of his past mistakes, once again called on Austin Wintory to set up the Pathless, our topic of the day.

The world is plunged into darkness! The Deicide, a bloodthirsty murderer, wants to dictate the path to be taken by living beings, and for this he has only one option, to annihilate the universe by depriving it of its light. Fortunately, the player, determined to plant his arrow in the knees of this gigantic monster, lands in this dark world to take the command of a young hunter who will meet a winged deity. A majestic eagle, which will accompany you throughout this dreamlike quest wishing to get away from the building built by ABZÛ and especially Journey.

Although holding a strong poetic and contemplative dimension, as well as many elements coming here and there from the past productions of Giant Squid and more particularly Matt Nava, the Pathless distances itself from its ancestors from its synopsis. Here, the new production of the Californian studio abandons the pacifist aspect of the first creations of the gentleman (Flower, ABZÛ, Journey), and gives way to a much darker story, where it will be necessary to make the arrowheads speak to defeat five targets of imposing sizes. A proposal that reminds us in many ways a certain Shadow of the Colossus, but we will return to it later.

To defeat these five colossi, our brave and unusual Hunter will use her agility, as well as her strange bow, to run faster and faster in green areas spreading out as far as the eye can see. But that’s not all, thanks to her fortune companion, namely the Divine Eagle, our hero, not stingy in strong sensation, will let herself go in crazy races, where it will be possible to chain acrobatics with ease. Indeed, in the Pathless, the player will be constantly surprised by these movements always impressive, fluid and intuitive, while simply holding the L2 key to accelerate, using the R2 key to shoot in talismans and generate speed, and jumping or flying with the X key. quickly, therefore, the player will feel at home in this universe, and traveling the lands as well as the heavens will give him a real feeling of freedom (common between the various productions of Matt Nava since Flower). Of course, this speed in the gameplay goes hand in hand with the construction of the universe that constantly asks to take height and to go from one point to another to solve many puzzles, which constitutes the second part of the gameplay of the Pathless.

Even if the Pathless manages to free itself from its elders, it is not that it arrives on our favorite media with a completely original recipe. The contemplative game varies approaches by offering races as we already specified above, but also infiltration, fighting, exploration, and puzzles. Each aspect of the game ultimately resembles recent or non-recent productions of the video game landscape. In addition to Shadow of the Colossus for the construction of the world and the clashes, the most striking example that constantly returns when playing the Pathless is of course the unmissable The Legend of Zelda: Breath of the Wild for the feeling of freedom it provides, the graphic aspect, the many puzzles hidden in the shrines, and the towers that will have to climb to restore the light. Game mechanics tested and approved, but which, unfortunately, are not used wisely in this new creation.

The Pathless, although beautiful on many points, in the end always offers the same steps to accomplish, which inevitably creates an impression of weariness with the player. The latter will have to visit four plateaus (forest Plateau, Sequoias Steppe, Great Plains, and Mountain Tundra), having on paper, a very distinct biome. Unfortunately, this is not true! Only the last World, Mountain Tundra, reveals a different proposal thanks to its snowy scenery and steep areas. Once you arrive at one of these locations, the player will have to climb up and scan the area using his eagle vision straight from the Assassin’s Creed saga to spot the important points: the famous shrines housing puzzles and the three great towers of Ubisoft that will have to climb later to purify the area. Now it remains only to solve the various puzzles that constantly play the same ideas (torches to ignite, mirrors to rotate, cobblestones to move, and circles of stone to position) to win a total of six golden statuettes that should be used in the famous Ubisoft towers to call the final boss of the area. A boss that will have to continue in a race, certainly epic, but identical to each recovery, and that will have to face face to face in a circular arena. As you understand, the objectives of the Pathless offer us only one and an only scheme that repeats itself four times. The title, which once offered players unique sensations of freedom, ultimately reveals an overly mechanical construction

Since Matt Nava has been in charge, he still serves us majestic works carried by Sublime and often singular artistic directions. This is the case of ABZÛ, titles he designed with thatgamecompany, and of course The Pathless. The new creation of the artistic director gives us once again an exciting world of many remarkable paintings, where it is enough to observe to travel in this universe where everything seems gigantic. The environments presented are simply magical, especially when the dynamic weather deigns to point the tip of its nose to make the snow-covered fir trees roar in the mountains or to tinge the world red when an enemy is nearby. Everything is constantly beautiful! Unfortunately, as we have already specified above, it is by the lack of diversity that the player will stop admiring the scenery that surrounds him. In the end, if the different open buildings are removed from the equation, there are only two types of environments, Green Plains and snow-covered mountains.

Of course, a graphic paw without a quality sound-design is nothing. This is where composer Austin Wintory comes in. Once again, the musician, with the Pathless, will delight music lovers, since the title regularly offers sublime compositions that will lead your bucolic walks or your fierce clashes. Moreover, the last battle of the game is embellished by one of these grandiose scores, making us almost forget the few readability worries of this ultimate fight.

With the Pathless, Giant Squid developers are finally emancipating themselves from the rules established by the excellent Journey. In addition to these suspension bridges and dreamlike places, the new production of the Californian studio unveils its own recipe. A particularly effective recipe that knows how to offer players many fascinating sequences and a credible universe wrapped in a controlled artistic direction. Unfortunately, this new recipe also and above all features terribly repetitive gameplay phases. Through the four proposed platters, you will have to constantly perform the same maneuvers, solve the same puzzles, defeat the same bosses and climb the same towers. Because of this, the Pathless is indeed a project that will make you travel for a few hours, but unfortunately, it will not be as exotic as a certain ABZÛ or as unforgettable as the fabulous Journey.